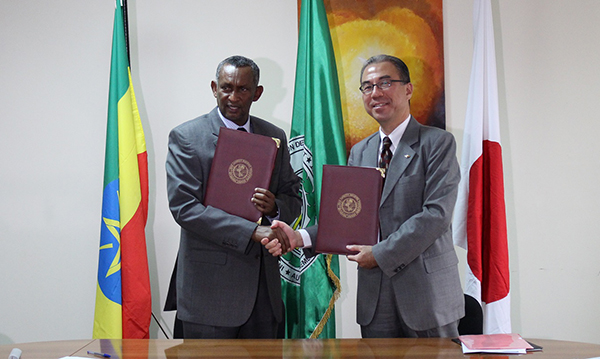 The Government of Japan Contributes 775,000 USD to the Intergovernmental Authority on Development

Home » The Government of Japan Contributes 775,000 USD to the Intergovernmental Authority on Development

Addis Ababa, 02-03-2016: A cooperation Agreement was signed between the Inter Governmental Authority on Development (IGAD) and the Government of Japan through the Japanese Embassy to Ethiopia, today the 2nd of April 2016 in Addis Ababa. The purpose of the Agreement is to contribute to the fight against violent radicalization in Somalia and countering terrorism.

Both sides have been working together earlier to strengthen the partnership relations on peace and security issues since stability is a crucial factor to promote international partnership such as trade, investment and technical cooperation. It was believed that Japan-Africa partnerships could be fruitful with proper consideration of peace and security.

It is with this background and rationale that the cooperation agreement was singed today with more emphasis to implement a project on countering Terrorism in Somalia.

From long period of IGAD’s engagement in Somalia, it is strongly believed that the Government and people of Somalia need to be supported in mobilizing community and religious leaders towards sensitizing their respective communities on the danger of radicalization in general terms and the need to maintain the current stability largely achieved militarily.

Therefore the major emphasis of this agreement is to initiate more direct consultation with religious and clan leaders in cooperation with the Government of Somalia so as to contribute to the efforts by the people themselves.

Since the beginning of the crisis in Somalia, IGAD as a regional organization has been engaged in various ways to facilitate peace processes in Somaliathrough its office of the “Facilitator for Somalia Peace and Reconciliation” and with the extended support of the IGAD partners.

Similarly, Japanese commitment for Africa has been demonstrated over the 20 years of the TICAD Process for African development and also through other partnerships. Japan was also one of the IGAD partners that have responded quickly to financially support IGAD to set up a ceasefire Monitoring and Verification Mechanism (MVM) in South Sudan in 2014.