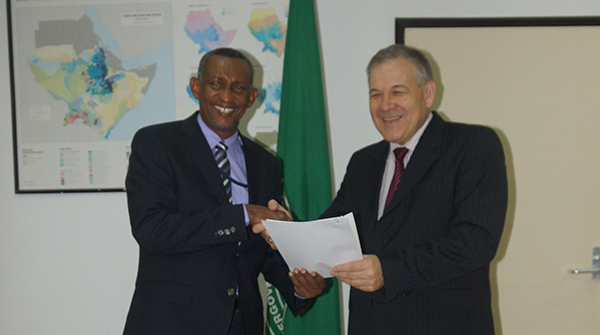 Djibouti, 31-03-2016: The Executive Secretary of the Intergovernmental Authority on Development (IGAD), HE Amb. (Eng.) Mahboub Maalim, this morning received accreditation credentials to IGAD from the Ambassador of the Russian Federation to the Republic of Djibouti and the Federal republic of Somalia (non-resident), HE Mr. Sergey Kuznetsov.

The two officials exchanged brief remarks during which the Executive Secretary welcomed the incoming Ambassador to his new functions and assured him of the good relations IGAD has had with the Embassy of Russia so far. The Executive Secretary continued that new ideas on areas of collaboration and partnership were welcome as Russia was a fresh development partner of IGAD compared to others.

“We value the good quality of the relations between our regional organization, our Member States, and the Federation of Russia”, he said.

HE Amb. (Eng.) Mahboub Maalim briefed the Russian diplomat on IGAD, its mandate, and major areas of interventions. He also touched on the opportunities and challenges in the region.

HE Ambassador Kuznetsov thanked the Executive Secretary for his warm welcome and clear briefing. “We will make sure to identify areas of cooperation based on the overview you gave us of your organization and the region”, he said.

Prior to receiving the Ambassador of Russia, the Executive Secretary had had a meeting in his office with the Ambassador of Australia to Ethiopia, HE Mr. Mark Sawers, where they discussed issues of interest to both parties.