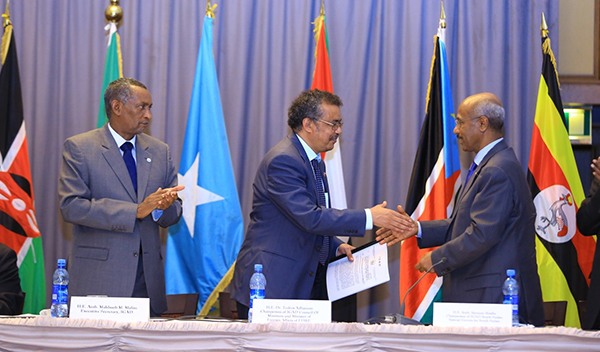 Addis Ababa, 02-04-2016: Following the submission of the report of the Special Envoys to the Republic of South Sudan to the Chairperson of the IGAD Assembly of Heads of State and Government, the IGAD Executive Secretary organized an event to recognize the distinguished service rendered by the IGAD Special Envoys and the IGAD partners.

In his opening remarks, the Executive Secretary of IGAD, H.E. Ambassador (Eng.) Mahboub Maalim expressed his appreciation for

• the commendable  support provided by the IGAD secretariat and mainly the staff of the IGAD Office for Special Envoys for South Sudan – recently named as IGAD South Sudan Office.

During the event, statements were made by representatives of the IGAD-Plus and other partners including

• Jean-Francois Hasperue, Acting Head of the EU Delegation to the African Union

• H.E Ambassador. Andreas Gardeer, Ambassador of the Royal Norwegian Embassy in Ethiopia and Representative of Troika for this event

• H.E. Ambassador La Yifan, Ambassador of the People’s Republic of China to Ethiopia

Delivering his statement on the occasion, the Chairperson of the IGAD Special Envoys, H.E Ambassador Seyoum Mesfin said “This report provides matters of facts in the mediation and negotiation of the South Sudan conflict as it evolved for about twenty-two months. The report shares the experience of the Envoys during the pre-mediation and mediation phase of the IGAD-Led South Sudan Peace Process. It’s our hope that the report will provide the much needed experience and contribute to policy and practice of conflict prevention, management and resolution”.

In his closing remarks, Dr. Tedros Adhanom, Minister of Foreign Affairs of the Federal Democratic Republic of Ethiopia and Chairperson of the IGAD Council of Ministers congratulated the IGAD Special Envoys for their patience, perseverance and dedication to bring the South Sudan Parties to signing the Agreement on the Resolution of the Conflict in the Republic of South Sudan (ARCSS). He also expressed his sincere thanks to the IGAD-PLUS and other international partners who have been working with IGAD from the beginning of the tragic conflict.

Recalling the decisions made at the 55th Extraordinary Session of the IGAD Council of Ministers held in Addis Abeba on 30 -31 January 2016, Dr. Tedros recognized the positive developments towards the implementation of the Peace Agreement while expressing his concerns on the delay. He also reiterated the collective call on the South Sudanese Parties to put maximum effort on the timely and all-inclusive implementation of the signed Agreement.

Finally, Dr. Tedros reaffirmed the continued engagement of the Government of Ethiopia and the IGAD in realizing the full operationalization and implementation of the signed Agreement.

After submitting the copy of the final report to the Chair of the IGAD Minister of Councils and the Executive Secretary of IGAD, the IGAD Plaque of honor was presented to