Swiss Funded Projects on Track in the IGAD Region

Home » Swiss Funded Projects on Track in the IGAD Region 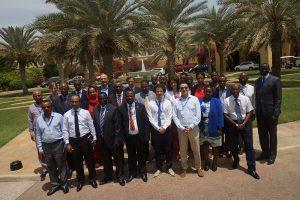 17-05-2017, Djibouti: The Executive Secretary of Intergovernmental Authority on Development (IGAD), H.E Amb (Eng) Mahboub Maalim, and the Ambassador of Switzeland to Ethiopia, H.E Amb Andrea Semadeni, this morning co-chaired the 3rd Steering Committee of the IGAD-Switzerland Cooperation in view of the projects being implemented in the IGAD region under the support of Switzerland Agency for Development Cooperation (SDC).

The meeting was officiated by H.E Mohamed Ali Hassan, Secretary General of Ministry of Foreign Affairs and International Cooperation of Djibouti, and Amb Shamebo Fitamo Adebo of Ethiopia in the presence of ambassadors from Kenya, Somalia, and South Sudan and as well as staff from SDC and IGAD.

Amb Maalim in his opening remarks noted that SDC-supported projects have been a success and this meeting will help reshape, review and better coordinate because of the valuable lessons learnt for the projects being implemented and those yet to be implemented.

Through this fruitful partnership, projects such as Management of Flood Disaster & Rational Utilization of Dauwa River Waters; Building River Dialogue & Governance in Africa (BRIDGE Africa); IGAD-FAO Partnership Programme on Building Resilience for Pastoralists using the IDDRSI platform to build resilience to respond to drought disasters; improving land governance in the IGAD region; building capacities for improved migration governance in IGAD Region as well as Institutional Strengthening Action Plan (ISAP III) in the IGAD region have been a success.

Amb Andrea Semadeni appreciated IGADs efforts in implementing the projects despite the emerging challenges in the region that were not fore sought when the IGAD-SDC Memorandum of Understanding was signed in 2014. He pledged continued support from the Government of Switzerland to contributing to an economically sound and safer region for the beneficiaries of these projects.

The two organisations have been in partnership since 2014 in the areas of food security, migration, peace and security.