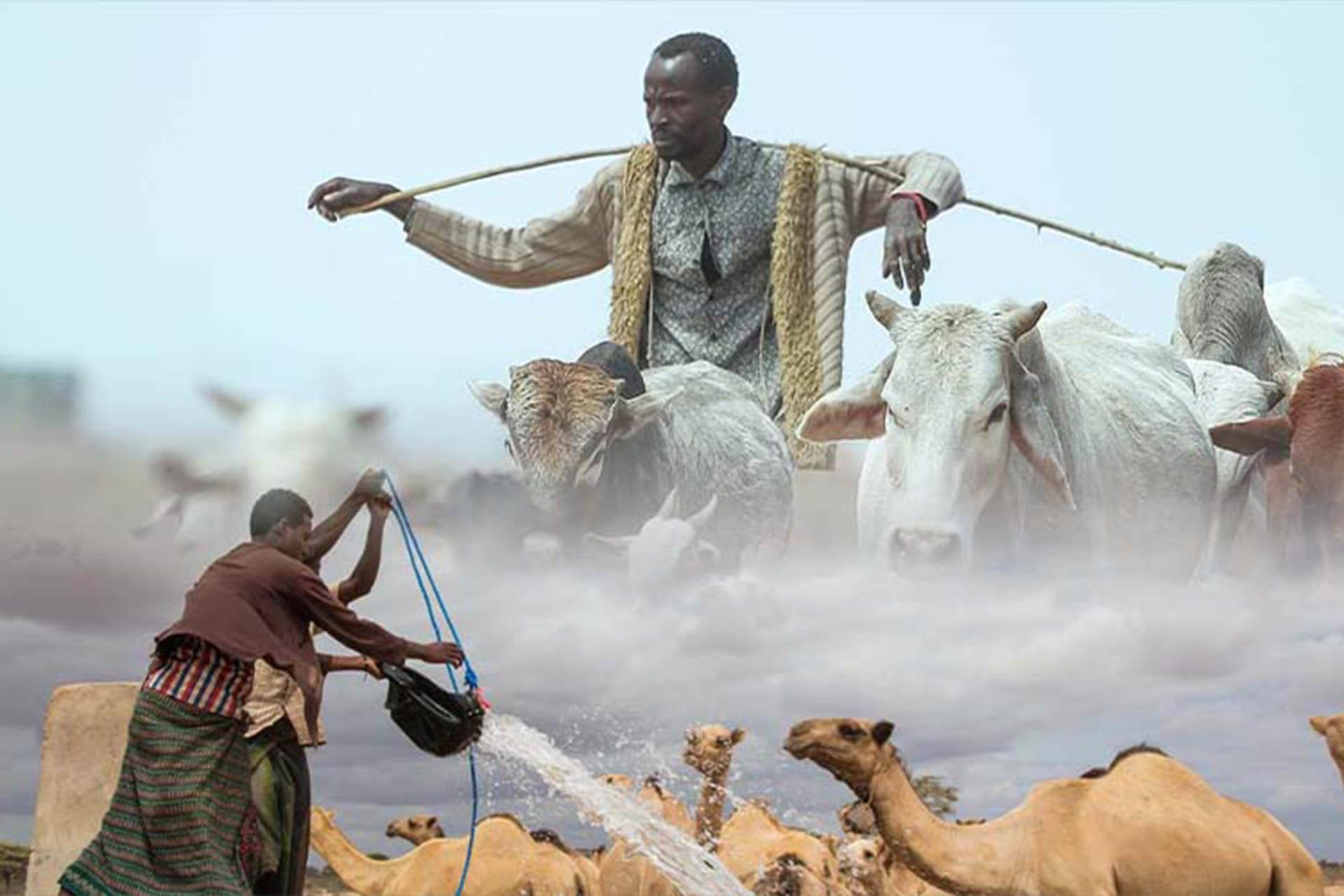 Livestock Development at IGAD in a Nutshell

Home » Livestock Development at IGAD in a Nutshell

ICPALD EFFORTS TO SUSTAIN PEACE IN THE REGION THROUGH LIVESTOCK DEVELOPMENT

IGAD Centre for Pastoral Areas and Livestock Development (ICPALD), is a specialized institution established by a decision of the 45th Ordinary Session of the IGAD Council of Ministers on 12th July 2012. It has the mandate to facilitate gender, conflict and environment responsive sustainable and equitable livestock and complementary livelihoods development in arid and semi-arid areas (ASALs) of the IGAD Member States.

The full potential of livestock sector in ASALs is hardly harnessed due to several challenges such as increased frequency of drought, inadequate availability of water, prevalence of animal diseases, and poor production practices as a result of inadequate extension services and inputs to promote the sector. Compounding the situation are poor market problems caused by remoteness and thin market outlets. Moreover, the myriad of challenges enumerated contributes to drop out of some pastoral youths making them vulnerable to recruitment into extremist groups or to engage in livestock theft or rustling that affects peace.

ICPALD has implemented a number of livestock related programs that contribute to sustainable peace among cross-border border communities. These include:

TRANSHUMANCE PROTOCOL IN PROMOTING PEACE AMONG PASTORALIST COMMUNITIES IN IGAD

The IGAD region is characterized by arid and semi-arid landscapes and environments particularly in the border areas. The border communities in the region have evolved livelihood systems such as pastoralism and agro-pastoralism that are suited to the ASAL conditions. However, this pattern of livelihood is increasingly coming under threat despite the fact that migration in search of water and pastures is central to their survival. The combined effects of among others, insecurity and conflicts, restriction of their mobility, inadequate land security, pastoralism land alienation for other economic activities and adverse climate variability have directly affected the pastoralists’ livelihoods.

Livestock constitutes a major economic, social and cultural facet of life for over 250 million people of the IGAD region. The region has about 520 million livestock of which 242 million (35%) are small ruminants. Majority of these animals are reared under a transhumant system that requires regular seasonal migration between feeding and watering grounds. Transhumance is a net contributor to the economies of the IGAD Region and not just a taker. Evidence shows that transhumance contributes 6-10% of the GDP of these economies. The Region has a significant number of pastoralists, which calls for enhanced governance of Transhumance. The region normally exports about 12.8 million heads of sheep and goats as well as 60,000 tons of meat every year.

The pastoralist way of life is defined by mobility as transhumant communities move their livestock in search of water and pasture. Mobility has been a core-adaptation mechanism in pastoral livelihood system and a crucial aspect of risk management in the harsh and unpredictable environments. However, restriction on mobility of pastoral communities and their livestock, conflicts and stricter cross-border control and defective tenure policies pose threats to sustainability of pastoral livelihoods. There is an intricate balance that must be met to sustain fragile but yet adaptive pastoral ecosystem; water, pasture, peace and disease control. In the 21st century, transhumant communities are not only living in a ‘shrinking’ world characterized by the re-emergence of walls and other barriers; but also, a world where cross-border mobility is increasingly being perceived as a security threat. Pastoral communities in this region are increasingly finding themselves in the cross-hairs of negative perceptions as both an environmental and a national security threat. Pastoralists in the IGAD region and indeed the African continent are assailed from all sides by population pressure as a result exponential growth, rapid expansion of transport infrastructure, improvements in crop production technology, the growth of manufacturing industries, discovery of mineral and fossil fuel deposits in rangelands, in addition to climate change and destructive environmental management practices. Never has the need to safeguard access to natural resources by pastoralists been more acute.

In order to address these challenges and protect pastoral ecosystem within its Member States, the IGAD Member States have adopted a Transhumance Protocol that will facilitate formal livestock cross-border mobility in the region. The Protocol on Transhumance is a calculated response from IGAD/ICPALD to allow free, safe and orderly cross-border movement of herders and their livestock to access water and pasture, to commit Member States to invest and channel adequate resources to pastoral areas, improve surveillance & monitoring of transhumant herds – thus promoting cohesion and preventing pastoral conflicts, enhance access to socials services including education, health and other basic services, and harmonize national laws and policies related to transhumance.

IGAD is also responding collaboratively with specialized Centers – ICPAC, CEWARN & ICPALD in rolling out of Integrated EWS (Early Warning System) that factors in nexus in climate variabilities, water, livestock, health, rangeland conditions and conflict EW and response. Most recently, a predictive forage and early warning system that provides up to 3 months lead time was launched, which will help monitor forage along the transhumance livestock corridors. This comes along with climate outlook forums that are released at seasonal level. The resource is publicly available and can be accessed at “East Africa Hazards Watch” platform.

The mission of ICPALD is to compliment efforts of IGAD Member States to sustainably generate wealth and employment through livestock and complementary livelihood resources development in arid and semi-arid areas of the IGAD Region. From inception, ICPALD adopted a set of core values to guide its operations, among them, it includes, Good governance; Conflict sensitivity; Community participation; Subsidiarity; Variable geometry; Value addition, complementarity and partnership; Gender sensitivity and equity; and Transparency.
The thrust on dryland development and climate change adaptation has the responsibility to:

The pastoral areas are richly endowed with other resources which if sustainably utilized can build resilience of the community. Community resource mapping is used to align resources and policies in relation to specific system goals, strategies, and expected outcomes. ICPALD has undertaken the following background studies to map resources in the ASAL areas:

The Regional Livestock and Pastoralism coordination working group which was established as a subgroup of the Food Security and Nutrition Working Group (FSNWG) to provide a platform for technical discussion and coordinated planning by professionals and experts dedicated to livestock and pastoralism programming in the Horn of Africa. Coordinated efforts are key especially in our cross border areas due to the level of interactions in across the borders.

The IGAD region is prone to weather related disasters. Thanks to innovative early warning systems, anticipating risks and timely action is now easier. This has helped transform the approach to humanitarian assistance from reactive to mitigative. Acting early strengthens resilience and eases pressure on limited humanitarian resources. Downscaling of climate forecasts into actionable messages for both pastoralists and policy makers is key to early warning-early action by countries and communities.

This was provided through the Regional Initiative in Support of Pastoralists and Agro-pastoralists (RISPA) and the IGAD-FAO Partnership Programme for building resilience of pastoral and agro-pastoral communities. The projects supported community action plans, government coordination structures and regional policies/ institutions in support of pastoral livelihoods in order to strengthen the resilience of agro-pastoral and pastoral communities and to diversify their livelihoods strategies and options. Thus contributing to a reduced vulnerability of (agro) pastoral communities in the Horn of Africa. Communities were also supported during the 2017 drought through provision of animal feeds to avert mass deaths.