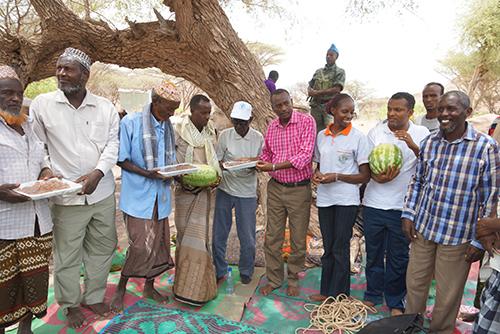 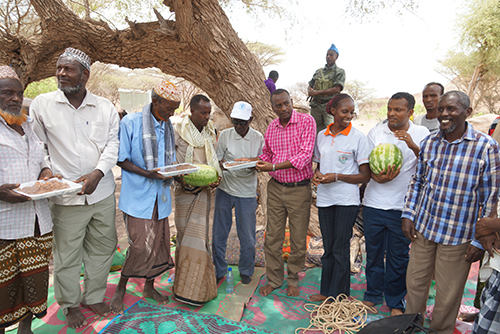 29-07-2015,Tadjourah (Djibouti): The Intergovernmental Authority on Development (IGAD) Civil Society Organization (CSO) Facility Programme in collaboration with the Association for the Integrated Development of Mabla (ADIM), active in the District of Tadjourah, Djibouti, today organized a field visit to one of ADIM project sites along with the Acting District Commissioner of Tadjourah, where they distributed dates and water melons to the community.

It is in the remote village of Wandid, located more than two hours on rough mountain tracks and only 35 kilometres away from the county town of Tadjourah, that the tripartite delegation was expected by the pastoral community who reserved them a warm welcome them under the harsh sun of July.

After the usual hand shakings and exchange of kind words, Mr. Habib Djilani, the Acting District Commissioner of Tadjourah leading the delegation, Mr. Daher Elmi, IGAD Natural Resources Programme Manager, Ms Cynthia Odera, IGAD CSO Desk Officer, Mr Houmed, Chair of ADIM, sat with the members of the community for a sensitization briefing where the benefits of food cultivation in a traditionally pastoral community were discussed.

Mr Houmed introduced the members of the visiting delegation and explained that IGAD, within the Danish funded IGAD CSO Facility Grant Project, is supporting the indigenous 15 years old Association for the Integrated Development of Mabla area (ADIM) for the purpose of helping ensure food security for the local population.

“IGAD has granted our Association a grant that has helped us enhance our tree nurseries project on two other project sites. And today, we are bringing to you the dates and water melons produced by the pastoral community of Daymoli, just 25 kilometres away, as part of the IGAD sponsored programme”, he told the community.

ADIM chose Wandid village to host their third project site. A garden of two hectares is being fenced, a shallow well by the river bed was dug, and a water tank of 15 meter cubes is under construction.

The Chief of Village, speaking for the community of Wandid, told the delegation that his community was interested in embarking on cultivation of vegetable, animal feed, fruits, and crops. “We would like to thank ADIM, the government of Djibouti, and all partners working for the well-being of our communities. And we commit ourselves to learning cultivation of food stuff”, he said.

The Acting District Commissioner highlighted the efforts by the Djibouti government to ensuring food security in rural areas. Then, dates and water melons from ADIM first project site of Daymoli were distributed to the community.