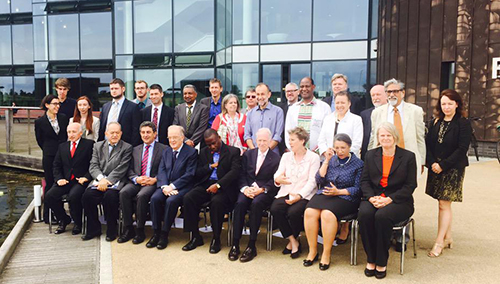 York (UK), 21-07,2015: Universities and colleges around the world have been urged to support the York Accord, which sets out a series of recommendations and a commitment to protect and rebuild higher education caught in the crossfire of armed conflict.

On 17 July 2015, the Intergovernmental Authority on Development (IGAD) – East African regional block, joined other academics and educationists from all corners at the University of York in the United Kingdom to compile the Accord   setting down in writing for the first time a minimum understanding of what are the basic principles for protection and recovery after conflict for higher education.

It is hoped that universities and colleges of higher education around the world will sign up to the historic document.

The meeting – hosted by the University of York in collaboration with Brookings Doha Center and the Institute of International Education (IIE) – brought together key individuals who have played a major role in drawing attention to the importance of higher education in war-torn countries.

The York Accord delegation was led by the former President of Portugal and laureate of the first UN Nelson Mandela Prize, Jorge Sampaio and other delegates included Professor Joseph Isaac, President of the African Methodist Episcopal University, Liberia and Dr Allan Goodman, President and CEO of the Institute of International Education and Professor Richard Mibey, President of Moi University, Kenya, and Nuur Mohamud Sheekh, Senior Humanitarian Advisor, IGAD.

Some of the key recommendations from the Accord include:

• Practical steps towards offering safe haven to scholars and academics affected by conflict;

• States and higher education institutions should review and update emergency protection and preparedness;

• Proposal to create a Rapid Response Mechanism for Higher Education to mitigate the effects of conflict and ensure students can return to university quickly.

A letter detailing  the key recommendations in the report will be sent to the United Nations Special Envoy on Global Education, Gordon Brown.

Professor Sultan Barakat, Director of Research at the Brookings Doha Center, said:  “The idea is to get as many universities to sign up to it. We are targeting the higher education institutions in the first place but we would like Gordon Brown to take it on board.”

“Higher education cannot be ignored; it is an important component of development and conflict resolution around the world.”

Academics say the need for the Accord could not be more pressing following a string of violent attacks on academic institutions world-wide – most recently in April when al-Shabab militants killed 147 people, mostly students, during an assault on Garissa University College in Kenya.

In Iraq, almost 500 academics have been assassinated and campuses looted, burned or destroyed in the bloody post-war violence.

Professor Barakat added: “This was the first time we were able to bring around the table vice-chancellors and senior academics from some of those conflict-affected countries. We had representation from Liberia, Kenya, Iraq, Jordan, Lebanon and Syria.

“We allowed them the time to express their concerns and I think that was very important and significant. The recommendations that have come out are practical, realistic and badly needed today.”

On his part, IGAD’s Nuur Mohamud Sheekh called on the delegates at the workshop to support IGAD’s initiative that created the “Consortium of IGAD Universities” that aims that facilitating student and faculty exchange within the region.

“The IGAD region hosts large numbers of refugees and IDPs and as such require a lot of support from development partners to help invest in the education sectors so that scholars and students fleeing violence and conflict are afforded the necessary assistance”, added Mr Sheekh.