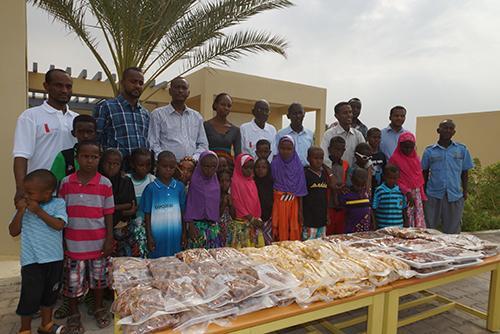 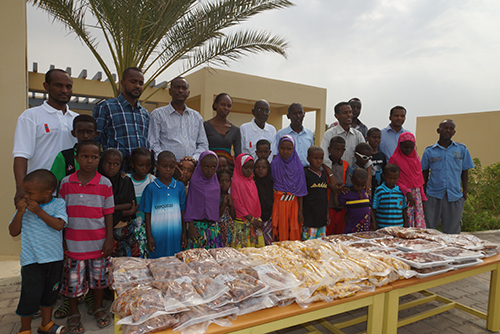 Tadjourah (Djibouti), 31-07-2015: For the second consecutive day and in collaboration with the Association for the Integrated Development of Mabla (ADIM), a delegation from the Intergovernmental Authority on Development (IGAD) yesterday was in Tadjourah, North of Djibouti, in order to participate in the distribution of dates and water melons to vulnerable populations in the presence of the Acting District Commissioner.

They were received by the Deputy Manager of the Orphanage, Mahamadeh Ali, his staff and the children who showed very much enthusiasm at the early morning visit.

Before dates and water melons were given to the children, the Chair of ADIM first took the floor during a short ceremony in the courtyard of the Orphanage to say how happy he was to be in a position to “hand over to our orphans locally-grown fruits”. “These water melons and dates show that we can grow food here, and we hope that the future generations will do a better job cultivating the land for the benefit of the community”, he said.

He also highlighted the support provided by IGAD CSO Facility Programme in strengthening and expanding ADIM existing tree nurseries and water catchment projects and sites, but also in helping develop new sites for the production of animal feeds, fruits, vegetables, and crops.

“This is the second time ADIM is coming to us with helping hands. ADIM was here with us a few weeks ago to share some of their first harvest of dates and water melons from Daymoli village”, the Deputy Manager of the orphanage said.

He then continued that the orphanage was established with, and was depending for the most part on, financial support from a European country. “And generally speaking, we do receive assistance in various forms from abroad”, he said before stressing that ADIM was the first local NGO to provide locally produced items to the orphanage.

“I hope that many more local initiatives will follow and it is our sincere wish that ADIM will come back with more”, he concluded.

SOS Village d’Enfants de Tadjourah hosts round 40 orphans from the District of Tadjourah between 8 months to 11 years of age.

Later in the morning, the delegation visited the clinic of Tadjourah to hand some more dates and water melons to the management.