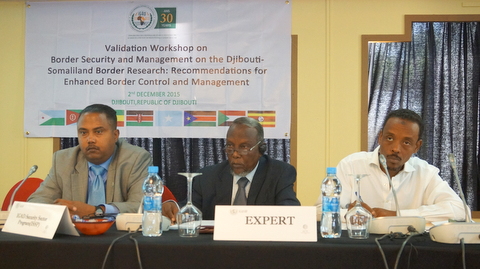 Djibouti, 3-12-2015: The IGAD Security Sector Program (IGAD SSP) held a Research Validation workshop with senior officials from different ministries and departments of the Government of Djibouti to review and analyze research findings and recommendations that was undertaken between September and December of 2014 on border security and management between Djibouti and Somaliland border given Djibouti’s unique geographical placement.

It is upon this background that IGAD SSP has commissioned a number of researches and field surveys to determine the effectiveness of the policies, laws, procedures and practices to effectively stop the movement of terrorists and other trans-border criminals across borders most notably; the Djibouti- Somaliland border that was undertaken between the months September and November 2014.

The workshop was presided over by Commander Abebe Muleneh, Director of IGAD SSP in the presence of Mr. Siraj Omar, Secretary General of the Ministry of Interior of the Government of Djibouti and Dr. Simon Nyambura, Head of Counter Terrorism Pillar IGAD SSP.

The participants discussed effective and enhanced border management practices, frameworks and mechanisms that can be applied to the 58 Kilometre border that lies between Somaliland and Djibouti in the areas of counter terrorism, insurgencies, piracy, human trafficking, money laundering and other forms of trans-national organized crimes.

Commander Abebe Muleneh, Director of IGAD SSP applauded the researchers and called upon the participants to hold the principles of solidarity, mutual trust and co-responsibility among member states and non member states of IGAD and respect human rights in their actions and procedures.

He also stated that border management seeks to control external access and threats to domestic territories and population which call for effective management that will be precise and legitimate leading to proper, safer, legal border and legal crossing and transactions.

According to Mr. Ali Mohamed Afkada, the Lead Researcher; the many issues leading to cross border conflicts and insecurity relate but not limited to skill, financial and institutional capacity, lack of resources, information sharing between security agencies, immigration and customs, technological challenges and adaptability, lack of proper border demarcations, long borders that are depopulated and remote, cross border terrorist activities and regroupings, lack of experienced, trained and informed staff at border points considering that many borders are in remote and semi arid areas.

He added that IGAD has studied and understood the issues and challenges that affect its Member States hence has continuously worked towards addressing them through creating and strengthening mutual and regional cooperation and activities between the parties to bring its mandate of regional integration to reality.

The participants agreed that there is need for IGAD Member States to work towards turning the existing borders to bridges for better diplomatic relations, free and legal movement of people and goods for regional social and economic development hence less conflicts and insecurity.

Dr. Simon Nyambura who was the facilitator of the workshop concluded that with globalization border management and security at border points remains a challenge hence IGAD Member States of IGAD must continuously develop and maintain operational control of their borders and possibility of conducting and managing joint cross border operations.