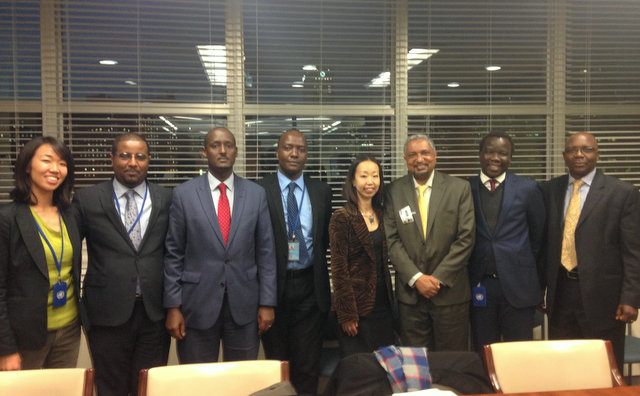 On 25 November 2015, IGAD and the UN jointly briefed the Permanent Missions of IGAD Member States based in New York on the outcome of the IGAD-UN High Level Dialogue on Peace and Security that was concluded in Djibouti on 17 November. The dialogue was organized to strengthen cooperation between the two organisations in the field of peace and security and to consolidate partnership in conflict prevention and peace-making that are pertinent to the Horn of Africa region.

The New York meeting was co-chaired by Mr Nuur Mohamud Sheekh, Senior Political Adviser in the Peace and Security Division of IGAD and Ms Ayaka Suzuki, Deputy Director of Africa I Division, UN Department of Political Affairs. Permanent Missions to the United Nations in New York of Ethiopia, Kenya, South Sudan and Uganda were present during the briefing.

The Permanent Missions were briefed about the Joint Framework for Cooperation on Peace and Security between IGAD and the UN Department for Political Affairs that was signed on 17 November in Djibouti City in the presence of IGAD Member States, the Secretariats of IGAD and the UN, and the African Union. Through the Framework, IGAD and the UN Secretariats intend to institutionalize their partnership to enhance the region’s resilience and its ability to effectively manage conflicts by taking advantage of the complementarities of the two institutions.

During the High Level Dialogue, IGAD and the UN discussed options for strengthening their cooperation in the field of peace and security, particularly in consolidating their partnership in conflict prevention, conflict management, peace making and peace building and counter-terrorism. The High Level Dialogue also provided an occasion to explore opportunities for cooperation in mitigating the effects and addressing the root causes of instability in the IGAD region and to outline joint strategies for action.

The representatives of the Permanent Missions welcomed the agreement and said that the structured partnership between IGAD and UN is long overdue. They noted that the strengthening of partnership will add a lot of value to the work of both the institutions and will go a long way in the realization of sustainable peace in the IGAD region. They also called for implementation of agreed upon Plan of Action and regular briefings on the same to the parties concerned.