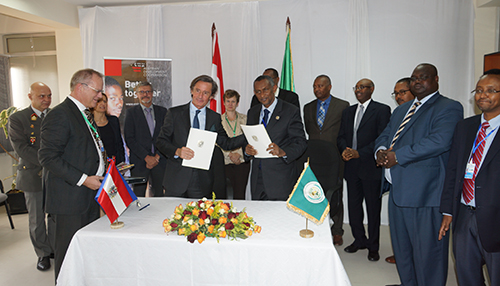 Addis Ababa, July 15, 2015: The Executive Secretary of the Intergovernmental Authority on Development (IGAD), HE Ambassador (Eng.) Mahboub Maalim, signed a Memorandum of Understanding (MoU) with H.E. Ambassador Peter LAUNSKY, Director General for Development Cooperation-Federal Ministry for Europe, Integration and Foreign Affairs of the Republic of Austria at IGAD office in Addis Ababa yesterday.

This MoU makes Austria a Lead Development Partner (LDP) for the Rapid Response Fund (RRF) and Early Warning and Response Interventions by IGAD Conflict Early Warning And Response Mechanism (CEWARN) specialized office based in Addis Ababa. “IGAD and the Government of Austria have reached the understanding to cooperate in the common pursuit of their objectives in Peace and Security” reads the opening of the MoU in substance.

The Director of IGAD CEWARN welcomed the large Austrian delegation in IGAD CEWARN conference room where both parties exchanged a few courtesy words.

Ambassador Maalim highlighted how important the MoU was for IGAD and thanked the Austrian government for the support provided in fostering peace. “We want to reaffirm our commitment to work with you in a transparent and total manner”, he said.

“Our Conflict Early Warning’s Rapid Response Fund (RRF) is on top of our agenda, and we are also inviting you to join our other IGAD programmes and to consider accrediting to IGAD the Austrian Ambassador to Ethiopia and the African Union” he continued.

Ambassador Peter LAUNSKY said that the large and high level delegation he was leading was a sign of the seriousness of the cooperation with IGAD his government is looking into. “As you can see, I have representatives from our Ministry of Foreign Affairs, Cooperation Agency, Ministry of Defense, and the Austrian Chancery to Ethiopia”, he said.

A brief presentation was then made about the situation in Somalia and the role of IGAD in the peace process by Ambassador Mohamed Affey, IGAD Special Envoy to Somalia and Head of IGAD Somalia Facilitation Office, followed by another one on South Sudan by Ambassador Gebrewolde, Director of Peace and Security Division of IGAD.

IGAD’s Conflict Early Warning and Response Mechanism (CEWARN) was set up in 2002 as a specialized unit to provide data-based conflict early warning information and analysis to government and non-government actors in IGAD Member States.

In 2009, CEWARN set up the Rapid Response Fund (RRF) as a multi-donors basket fund to support locally-driven crisis response projects that contain the spread and escalation of violent conflicts across the borders of Ethiopia-Djibouti; Ethiopia-Kenya-South Sudan-Uganda; as well as Ethiopia-Kenya-Somalia.

Projects supported by the RRF range from short-term peace dialogues to modest development projects that provide peace dividends to communities affected by conflict. In line with CEWARN’s strategic aim of promoting proactive response to violent conflicts in the region, these projects are also intended to catalyze long-term structural and policy response to conflicts.