IGAD is Horrified by the Killings of Civilians in Mogadishu

Home » IGAD is Horrified by the Killings of Civilians in Mogadishu 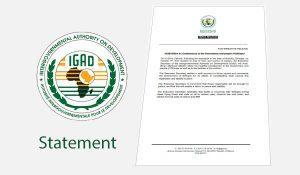 20-02-2017, Djibouti (Djibouti): The Intergovernmental Authority on Development (IGAD) condemns in the strongest terms possible the terror attack  of  yesterday  (19th   of  February,  2017)  on  civilians  at  Medina,  the southern part of Mogadishu, the capital of the Federal Republic of Somalia.

IGAD expresses its heartfelt condolences to the people and government of the Federal Republic of Somalia as well as to the families of those who lost their precious lives in this onslaught against innocent people. IGAD also commends the Somalia National Army and those who responded in the aftermath of the attack to help the injured.

This atrocity, which comes in the wake of Somalia’s successful elections, demonstrates yet again that the terrorists have no regard for the sanctity of human lives and seek to simply derail the country from pressing forward along the path of peace and development.

The so sadly high number of deaths and injured reported is attributed to the fact that this cowardly act targeted shops, tea houses, and restaurants. Needless to state that history has shown, in no uncertain terms, that any terrorism is doomed to fail.

IGAD stands with the people and Government of Somalia, and expresses its confidence that they will continue to show the same kind of resolve they have shown thus far in their efforts to rebuild the country.