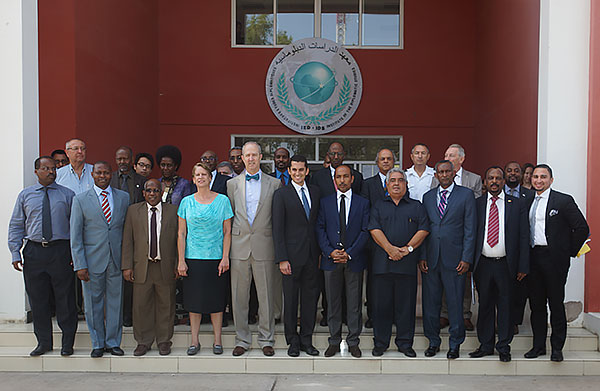 The Intergovernmental Authority on Development (IGAD) in partnership with Djibouti and United States Governments held an inaugural meeting for the Preventing and Counter Violent Extremism Center of Excellence on October 16, 2016 at the Institute of Diplomatic Studies in Djibouti, where the CVE Center will be located.

The CVE Center of Excellence will be a dedicated platform where training, research and analysis, counter narratives and best practices will be cultivated and shared. The Center will also facilitate and encourage efficient coordination, cooperation and collaboration among the Horn and Eastern Africa  Countries , Civil Societies as well as,

The center will also be devoted to a counter messaging hub for dialogue and communications, capacity building programs, to preventing and counter violent extremism in all of its forms and manifestations.

The meeting was officiated by Mr. Mohammed Ali Hassan the Secretary General, Ministry of Foreign Affairs, Djibouti government together with Amb Tom Kelly, American Ambassador to Djibouti and Mr. Michael Ortiz , Deputy Coordinator CVE, US Government in the presence of His Excellency Amb (Eng) Mahboub Maalim, the Executive Secretary of IGAD.

In his inauguration speech; Mr. Mohamed Ali Hassan thanked IGAD, IGAD member states and partners for their commitment to the CVE center considering the role it will play in the region and called for collective efforts and collaboration by all partners for ownership.

Mr. Ortiz , the Deputy  Coordinator  CVE US Government thanked IGAD for the commitment and significant role of being at the forefront  of making the Center a reality and called for the partners’ commitment to the implementation through the use  of available resources for sustainability of the center.

Amb. Tom Kelly called for collaboration between partners to address the root causes of conflict, strengthen capacity and accountability as well promote good governance. He emphasized America’s committed to the partnership with the people and governments of the IGAD member states to promote democracy, peace and prosperity as the world pursues comprehensive and coordinated approaches to build and sustain security capacity and cooperation.

Amb Maalim’s expressed his gratitude to the government and the people of Djibouti for hosting the Center and support; and that of UNDP, Government of Japan and other partners that are supporting the development of a Regional PVE/CVE Grand Strategy..