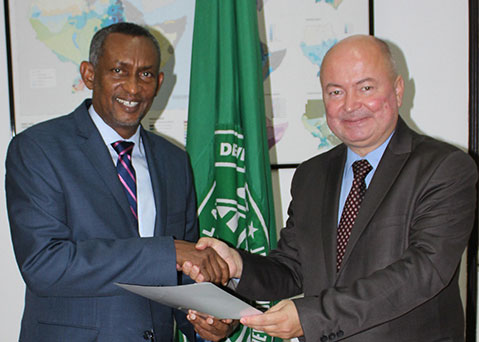 17-10-2016, Djibouti: The Executive Secretary of the Intergovernmental Authority on Development (IGAD), HE Amb. (Eng.) Mahboub Maalim, received credential letters from the new Head of the European Delegation to Djibouti with accreditation to IGAD, HE Amb. Adam Kulach, at IGAD Secretariat yesterday October 16th.

The Executive Secretary took the opportunity to welcome Amb. Kulach to Djibouti where IGAD Secretariat is headquartered, and to IGAD Secretariat before briefing him on the privileged relations the two organizations have always had.

“We know that Heads of EU delegations to Djibouti are also our advocates at the various EU institutions in Europe, and I am convinced that you are no exception”, said Amb. Maalim.

The Executive Secretary reminded his counterpart that the EU was a major development partner to IGAD, if not the first in volume of financial support. He recalled how the EU is supporting IGAD Peace and Security initiatives and programmes above all.

Amb. Kulach thanked the Executive Secretary for his warm welcome before stating his strong will and strong mandate to further deepen the working relations the EU Delegation has had with IGAD.

“We will continue to support running programmes, and we are also bringing financial support to two new upcoming programmes related to free circulation of people and corporate development”, he said.

Amb. Kulach expressed his interest in partaking IGAD events and meetings as much as his schedule would permit and inquired about the status on the IGAD Treaty. He finally stressed the EU interest in collaborating with IGAD in the areas of migration, counterterrorism, and stability as priorities.