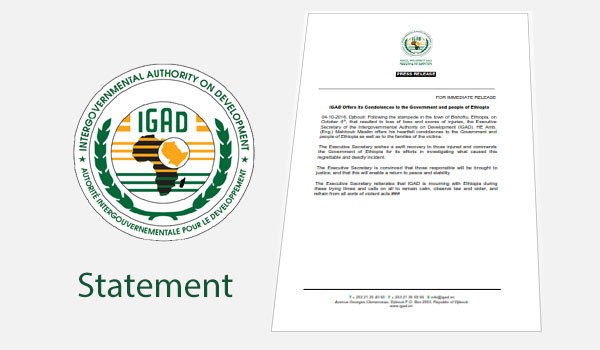 16-10-2016, Djibouti: It is on his own behalf and that of the entire IGAD family that the Executive Secretary of the Intergovernmental Authority on Development (IGAD), HE Amb. (Eng.) Mahboub Maalim, congratulated the new Secretary General of the United Nations, Mr. Antonio Guterres.

“I wish to extend my warmest congratulations on the occasion of your nomination to the post of Secretary General of the world body that is the United Nations”, the Executive Secretary stated in his message.

The Executive Secretary of IGAD assured the new Secretary General of the UN of his own support and that of IGAD towards the achievement of the Sustainable Development Goals 2030.

“Your undisputed and outstanding experience in state and international affairs as a leading statesman will contribute to strengthening furthermore the global Organization you have been designated to lead”, Ambassador Maalim Said.

“I am convinced that the United Nations will benefit a lot from your leadership as well as the Regional Economic Communities such as IGAD”, reads the congratulatory message of the Executive Secretary.