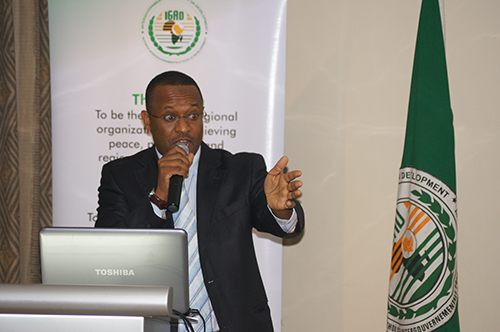 The meeting that was organized in collaboration with the BRAVE (Building Resilience Against Violent Extremism) initiative brought together representatives from embassies, high commissions and diplomatic missions, as well as officials from relevant government institutions including the ministries of foreign affairs, interior and coordination of national development.

The Director of CEWARN, Richard Barno conveyed the apologies of the IGAD Executive Secretary, who could not attend the meeting due to another pressing assignment in Kigali, Rwanda. Delivering a statement on behalf of the ES, Barno thanked the participants for honoring the invitation and commended the BRAVE initiative for ‘doing things differently’ in the fight against violent extremism in Kenya.

He pledged the continued the support of IGAD and called on the development partners to cooperate and support such initiatives and efforts in IGAD member states.

Dr Mustafa Ali, the BRAVE Convenor outlined the operational framework that the initiative has deployed to address the challenges of CVE in the country. He expressed his gratitude to IGAD through the Executive Secretary for co-hosting the meeting and appealed to other stakeholders including government agencies and development partners ‘to join the movement’.

Complementing the BRAVE powerpoint presentation, Dr Simon Nyambura, ISSP Head of Counter Terrorism stated that IGAD will continue to sensitize stakeholders in the region on the need to institutionalize CVE in the Horn of Africa and Eastern Africa Region including the establishment of a centre of excellence.

He informed the distinguished participants that the IGAD Secretariat and the State Department of the US Government will convene another meeting next week in Djibouti to follow up on this matter.

Other speakers included Joseph Irungu, the Interior Secretary and Hon. Abdullahi Wako, a member of the BRAVE Steering Committee, who moved the vote of thanks.