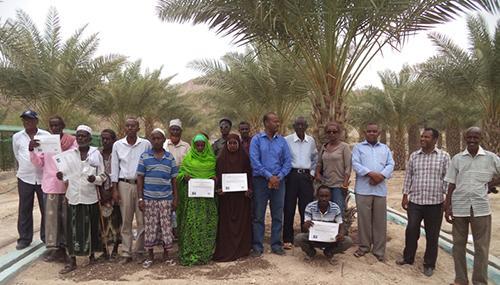 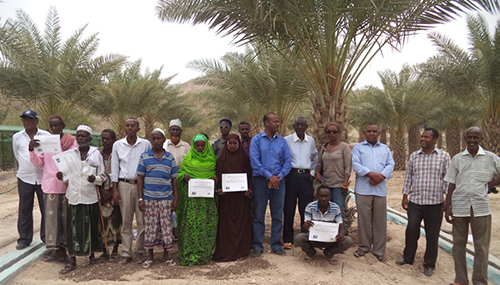 Tadjourah (Djibouti), 13-08-2015: A three-day training workshop on crop production to agro pastoralists was closed this morning by the Prefect of Tadjourah, Mr. Mohamed Abdoulmalik Banoita, in the presence of President of the Regional Council of Tadjourah, Mr. Hassan Houssein, IGAD natural Resources and Renewable Energy Programme Manager, Mr. Daher Elmi, and the Chair of the Association for the Integrated Development of Mabla (ADIM), Mr Houmed Hassan.

On arrival at training the site of Daymoli in the District of Tadjourah, North of Djibouti Republic, the delegation led by the Prefect of the region and the President of the Regional Council were welcomed by the population of the village of Daymoli. After this welcome home in the village, the Prefect proceeded to read his closing speech at the premises of the Agricultural Centre of ADIM.

The prefect of Tadjourah praised the objectives of the training, calling the training a success to be credited to the dynamism of ADIM Association which “is working hard to improve living conditions nomadic populations, notably through access to safe drinking water, development of agro pastoral activities and environmental preservation”. He also highlighted the support provided by IGAD in such an endeavour.

The prefect also congratulated the trainers of the Djibouti Ministry of Agriculture and the Centre for Studies and Research of Djibouti (CERD) who moved from the capital to provide this training on a remote rural site, the first of its kind in the country.

Theses closing remarks were then followed by the handing-over of certificates, donation of seeds and agricultural equipment to the twenty-four agro pastoralist participants.

“These equipment and seeds will enable them to start and pioneer agricultural activities in their respective localities”, Daher Elmi said.

After the ceremony, the leaders of the ADIM conducted a guided tour of the different embodiments of ADIM Association in their development of project such as production of date palms, animal fodders, crops, vegetables and fruits. During the visit, the leaders of the Tadjourah Region had explanations about farming techniques from the expert Researchers from the Centre for Studies and Research in Djibouti (CERD) and agronomists Executive of the Ministry of Agriculture.

Finally, the visit ended on a note of encouragement to all the actors.