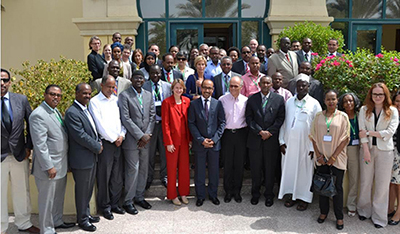 Tackling violent extremism: a regional and a global concern

Home » Tackling violent extremism: a regional and a global concern

Djibouti, 29-08-2015: A two-day Experts workshop on Countering Violent Extremism (CVE) in the Horn and Eastern Africa closed today in Djibouti under the auspices of the Executive Secretary of the Intergovernmental Authority on Development (IGAD), HE Ambassador Mahboub Maalim, the Charge’ of the United Sates Embassy to Djibouti, HE Christina Higgins, and the Secretary General of the Ministry of Foreign Affairs of Djibouti, Mr. Mohamed Ali.

Building on the momentum of ongoing regional efforts throughout the Horn and East Africa region, and in line with the February White House CVE Summit and the June 25-28 Kenya regional CVE Summit, this meeting was designed to focus on the best ways to institutionalize CVE in the Horn of Africa and Eastern Africa Region. Experts focused particular attention on practical and tangible outcomes that will strengthen CVE capacities and cooperation across the region. These outcomes will be highlighted at the upcoming leaders’ summit during United Nations General Assembly high-level week in September 2015.

Ambassador Maalim, in his closing remarks, thanked the US Government for the support provided to the CVE initiative and also to the workshop itself. “The importance of this meeting need not be emphasized to the experts you are. We all know that the issue of peace building is a top priority to the countries of the IGAD region considering the complexity of the subject matter”, he said.

He reiterated that the expected outcomes should be turned into recommendations: one highly desired recommendation being the establishment of a Center of Excellence to Counter Violent Extremism for the IGAD region.

“We gather here today to identify and to implement practical and tangible outcomes that will strengthen CVE capacities and cooperation across the region. Our work today to identify concrete solutions, including the proposal for an East Africa CVE Center of Excellence,” said Charge’ Higgins. She also highlighted that “we must stand together in support of one another and vow to strengthen our collective efforts to eradicate the roots of violent extremism throughout the region”.

Mr. Mohamed Ali noted that IGAd region and member states made significant progrees in the struggle against violent extremism, and thanks to support form partners and regional cooperation. He stressed that Djibouti would be happy to host the CVE Center of Excellence.