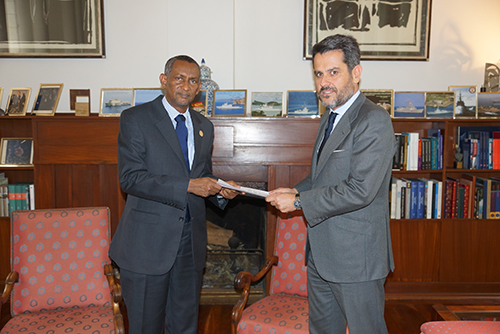 Addis Ababa, July 14, 2015: The Ambassador of Spain to Ethiopia and the African Union (AU), HE Miguel Fernandez-Palacios, today presented his credential letters to the Executive Secretary of the Intergovernmental Authority on Development (IGAD), Ambassador (Eng.) Mahboub Maalim, in his capacity as the first ever Spanish Ambassador to be accredited to IGAD. Amb. Maalim, on a working mission to the ongoing Third International Conference Financing for Development held in Addis Ababa, took the opportunity to visit the Ambassador of Spain at the Chancery of Spain in the Ethiopian capital city for this purpose.

This credentials presentation ceremony follows the official visit by the Executive Secretary of IGAD to Spain of June 08, 2015 upon invitation from the Spanish Ministry of Foreign Affairs. Among the issues discussed with high level officials of the Ministry of Foreign Affairs of Spain was the need for formal diplomatic ties between the country of Spain and IGAD. Also, discussion evolved around deepening and strengthening the existing relations.

The Executive Secretary reiterated his commitment to always keep alive the link between the government and people of Spain with IGAD region and governments.

“We are really happy with the quick action taken by the Ministry of Foreign Affairs of Spain in accrediting HE Ambassador Fernandez-Palacios to IGAD, just a few weeks after we discussed the matter. This diligence in dealing with us shows the good-will Spain is putting in building relations with IGAD”, Amb. Maalim said during the ceremony.

In his turn, Ambassador Fernandez-Palacios expressed his profound satisfaction to see formal ties being set for the purpose of interacting within diplomatic structures. “Today is a historic day for both of us as it is the beginning of a new era of excellent relations”, he said.

Finally, Ambassador Fernandez-Palacios presented a book on Ethiopia-Spain historical relations as a token of good-offices.