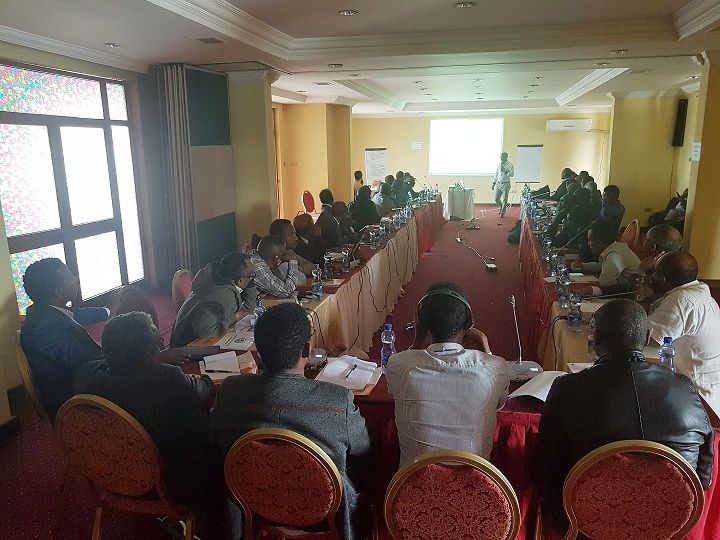 31-08-2018, Bishoftu, Ethiopia: The IGAD Security Sector Program (IGAD SSP) today concluded a three day workshop where high level participants from Governments of Djibouti and Ethiopia were able to exhaustively review, evaluate and later validate by making improvements and recommendations to enrich the earlier findings in the report on the “Mapping and Analysis of the Cross-Border Security Threats in the IGAD Region: A Case Study of the Dewele – Tog Wajaale corridor”.

The corridor in discussion was the tri-border area that stretches from Dewele to Tog Wajaale where Dewele has a common rail and road border crossing between Djibouti and Ethiopia while Tog Wajaale has a road crossing border point between Ethiopia and Somalia (Somaliland) connecting to Hargesya and Port of Berbera on the Gulf of Eden. In the report it was found out that the corridor is faced with multiple cross-border criminal activities including migrant smuggling, illegal cash flows, contraband and smuggling of prohibited goods and counterfeiting to mention few.

Members of the two delegations revised the report findings and with full dedication during the three days provided detailed comments, suggested recommendations and inclusions for an improved and richer in content and facts report that can later be used as reference within the IGAD region and beyond.

It was agreed that most of the comments and recommendations will be taken into consideration and incorporated in the final report.

IGAD SSP graciously accepted the reservations raised and agreed to revisit and share with participants the report before the final edit.

IGAD has done and is continuously planning assessments and studies to be carried out in other areas in the IGAD region that share similar vulnerabilities, threats and risks.

It believes that through collective effort, collaboration and coordination of its Member States to effectively address the different challenges, will then the region be able to realize sustainable peace, development and foster regional economic integration that IGAD strives to achieve.

The project is being financially supported by the Government of Sweden and facilitated by IGAD SSP.