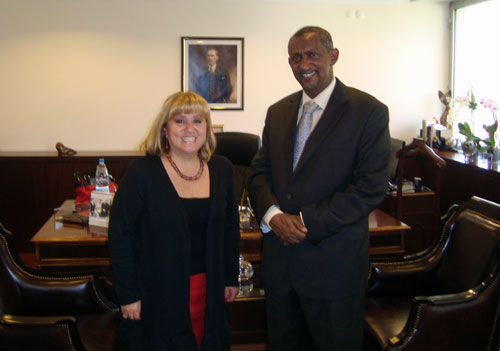 As part of the growing Turkish engagement in the IGAD Region, particularly in Somalia, the Executive Secretary of IGAD H.E. Engineer Mahboub Maalim was invited to Turkey for joint consultative meetings on possible areas of cooperation.

During the stated visit from April 25-26, 2012 in Ankara, various consultations were carried out with high level officials of the Turkish Ministry of Foreign Affairs, Turkish Disaster and Emergency Management Presidency, and the Turkish International Cooperation and Coordination Agency (TIKA).

After thorough deliberations particularly with, Her Excellency Ambassador Birnur Fertekligil, Deputy Undersecretary of the Turkish Ministry of Foreign Affairs, concrete areas of cooperation between Turkey and IGAD have been identified. These areas include supports for IGAD efforts for Somalia peace and reconciliation.

During his consultation with Mr. Mehmet Sinan Yildiz, Deputy Director General of Disaster and Emergency Management Presidency and Mr. M.Sureyya ER, Vice President of TIKA , views were exchanged on how cooperation between IGAD and respective Turkish organizations can be enhanced.

Finally a partnership Memorandum of Understanding between IGAD and the Ministry of Foreign Affairs has been drafted for further consultation and eventual signing by the two partners.

The Republic of Turkey has quickly responded to the drought situation in the Horn of Africa and also engaged in development activities in Somalia.