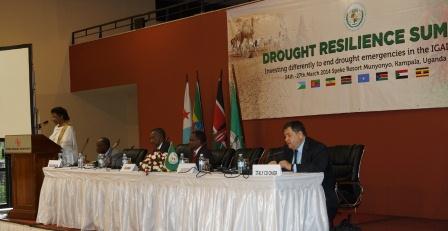 Kampala, 26-03-2014: The Second IGAD Drought Disaster Resilience and Sustainability Initiative (IDDRSI) General Assembly was held today in Kampala in the presence of the concerned State Ministers from member states, as well as all the participants to the Steering Committee Meeting (see  https://goo.gl/vJ5JiK ), as it was facilitated and chaired by the Executive Secretary of IGAD, Ambassador Mahboub Maalim.

This second IDDRSI ministerial meeting whose theme was “Investing differently to end drought emergencies in the IGAD region”, was preceded by a two-day Steering Committee Meeting on March 24th and 25th and is aimed at preparing the Heads of States Summit on resilience in the IGAD region.

Ambassador Mahboub Maalim started his opening remarks that drought was not a phenomenon specific to the IGAD region. “Other parts of the world were and are still affected by droughts. But resilience to drought disasters mechanisms have been put in place so they do not affect populations, livestock, and agriculture the same way droughts impact our region”, he said. He then called on the governments of respective member states to invest in drought resilience further more.

Mrs Mulu Haile, Head of the IGAD Civil Society Organizations (CSO) and Non-Governmental Organizations (NGOs) Forum exposed the structure of the Forum to the audience. She also highlighted the role the IGAD CSOs and NGOs Forum is to play in building resilience among the region grassroots. Along the same lines, in the remarks given on behalf of Mrs Olive Kigongo President of IGAD Business Forum and Uganda National Chamber of Commerce and Industry, it was noted that the IDDRSI Initiative was “in tandem with the IBF’s agenda that puts emphasis on expanding intra-IGAD and intra- African trade”.

The Global Alliance speaker gave a short background about the alliance highlighting when it was launched, mission and objectives. “The GA works with Member states’ governments, local leaders and regional bodies to change the way the international community does business, and puts resilience at the heart of the development efforts in the Horn of Africa and Sahel”, he said in substance.

Also the Ambassador of Italy to Uganda sitting as Co-chair of IGAD Partners Forum (IPF), Dr. Chiji Ojukwu representing the African Development Bank Group, and Hon. Minister Eng. Hillary Onek, Minister of Disaster Preparedness of Uganda gave opening remarks in which they explained how accurate IDDRSI was to the region.

The opening of the General Assembly was followed by the signature of a Memorandum of Understanding between IGAD and the UN Office for the Coordination of Humanitarian Affairs (UN-OCHA).