Home » The Second Drought Resilience Summit Wraps up in Kampala 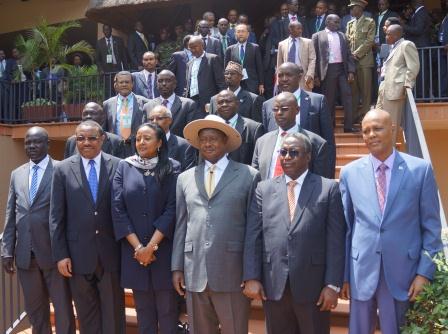 The Executive Secretary of IGAD who was facilitating the summit remarked, during the opening ceremony, that peace and security have been priorities for IGAD region and that the development agenda should also top IGAD’s agenda. He also thanked President Museveni and the Republic of Uganda for hosting the Summit and financially supporting the Second IDDRSI Steering Committee Meeting, the Drought Resilience Ministerial General Assembly and Heads of States Summit.

Key speeches were given by development partners of IGAD, such the IGAD Partners Forum, the Global Alliance, the World Bank Group, and the African Development Bank.

In his opening remarks, President Museveni welcomed the participants before giving a brief overview of the history of IGAD as a regional organization. He highlighted that things needed to be done differently as droughts have been increasing in frequency and severity. He noted that his country was also affected by the phenomenon and his government was working towards drought resilience.

The Summit was then declared open by Chair Hailemariam Desalegn. The Summit closed with a final Declaration (see attachment below for full text) read by the Executive Secretary of IGAD.