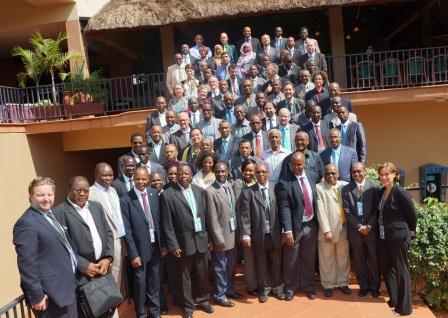 Kampala, 25-03-2014: The Second IDDRSI Steering Committee meeting started yesterday in Kampala under the chairmanship of Ambassador Mahboub Maalim, Executive Secretary of IGAD, Mr. Muyaka Zakayo, Assistant Commissioner at the Office of Soil and Water of the Ministry of Agriculture of Uganda and member of the IDDRSI Steering Committee, Mr. Fabio Melloni, Addis-Ababa based Director of the Italian Development Cooperation and IGAD Partners Forum Co-Chair (Italy), and Mr. Aldo Biondi, Head of the Regional Support Office for Central, Eastern and Southern Africa of the European Commission.

Speaking on behalf of the Ugandan Government, Mr. Muyaka Zakayo welcomed the participants to his country and noted that his government and people were happy Uganda was chosen to hold such an important event. He also highlighted that Uganda has benefited from this Initiative and made progress in combating drought emergencies since.

In his opening remarks, Mr. Fabio Melloni reminded the audience about the strong commitment from IDDRSI partners to remove drought emergencies from the IGAD region. “We are here to know about the achievements so far”, he said. He also mentioned the situation in South Sudan and encouraged South Sudanese to work towards peaceful resolution of the crisis.

Mr. Aldo Biondi, in his turn, said that momentum was kept and that the EU Commission, and the Global Alliance at large, was delighted to be part of this Initiative.

Ambassador Mahboub Maalim considered the meeting a success seen the high turn-out from invited participants. “This meeting is a follow-up to the one held three years ago in Nairobi”, he said. He added that since then partnership and collaboration between his organization, members states, civil society organisations, and development partners have raised the agenda of drought resilience.

He noted that this meeting was special as it was laying the ground for an IDDRSI Ministerial level meeting on March 26th followed by a Heads of States summit that will be held on 27th of this month. “These summits will give us the infused energy to move forward”, he said.

He also mentioned the preoccupying situation in South Sudan before declaring the meeting open.

After two days of informative presentations by various stakeholders, fruitful Steering Committee members discussions, and plenary debates, the Executive Secretary of IGAD got the participants adopt the agenda for the General Assembly then declared IDDRSI Forum closed.