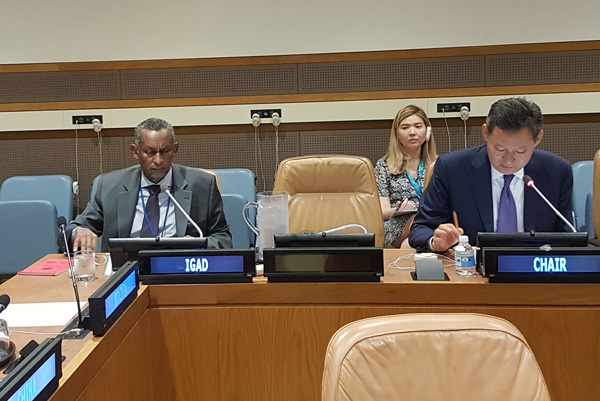 The briefing was with regard to the final findings of the report on the Transnational Terrorist Threat in the Horn of Africa region. The submission of this report is the second phase of the Transnational Security Threat initiative.  The first phase had focused on Al-Shabaab and its report submitted to the UNSC Sanctions Committee on Somalia and Eritrea was done in mid August 2016.

The main aim of the Transnational Security Threat initiative is to promote cooperation and coordination within the region through the IGAD Security Sector Program (SSP). In addition, the submission and briefing sessions of the findings of these reports to the UNSC Sanctions Committee is aimed at underscoring the threat that these various groups represents to the region, as well as assert the full cooperation of IGAD and its Member States to the UN Monitoring Group on Somalia and Eritrea in line with UNSC Resolution 2023 (2011) paragraph 17, among others.

Prior to the last briefing session, the high level delegation consisting of the IGAD Executive Secretary, the SSP Director and experts from Sahan Research held meetings with representatives of the IGAD Member States. During the meetings, the delegation provided the representatives with the findings that IGAD had also made and objective of the presentation that the team was going to make to the UNSC Sanctions Committees.  The Member States expressed their satisfaction with both the initiative and the final report. They also congratulated the team on the work done so far and further offered to provide any necessary support in the future to ensure success of the initiative. In addition, the representatives requested the IGAD Executive Secretary to brief them at least twice a year in New York on the progress.

The delegation also held meetings with the representatives of other Permanent Missions to the UN, such as the UK and Kazakhstan. The latter through H.E. Ambassador Kairat Umarov is currently serving as the Chair of the UNSC Sanctions Committee on Somalia and Eritrea, as well as Al-Qaida and ISIL.

Amb Umarov welcomed the final report and further emphasized the need for regional and sub-regional organizations to provide input to the UN Security Council. He praised the tireless efforts of IGAD to address issues affecting the Horn of Africa region and specifically Somalia and South Sudan. The Ambassador also noted that the important role that IGAD continues to play to relevant UNSC Sanctions Committees and informed the delegation that he plans to travel to the region.

On 30th June 2017, Amb Mahboub presented the findings of the final report to members of both Sanctions Committees and was well received. The members and the Chair encouraged IGAD to conduct further briefings in the near future. (END)