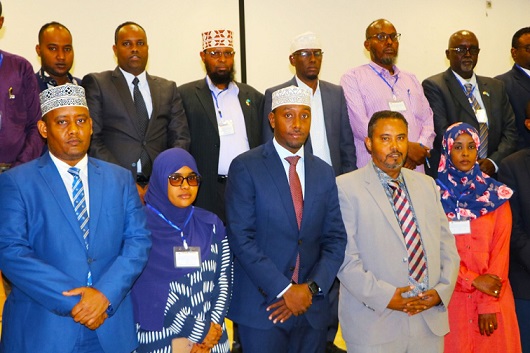 Jan.27,2020 (DJIBOUTI-VILLE,DJIBOUTI):IGAD Security Sector Program (IGAD SSP) is commencing the National training for Somalia Imams’ on disengagement, deradicalization, rehabilitation, and reintegration (DDRR) approaches to counter terrorism in Djibouti at IGAD Head Quarter. It will be conducting between 26 January and 05 February 2020. The training is financed by the government Japan as a continuous support for a series of training for Somalia, which were held in Jig Jiga, Djibouti, Dire Dawa and Kismayo for Somali nationals that consists of youths, religious leaders, clan leaders, public officials, civil society organizations and other related stakeholders. The training is welcomed by Commander Abebe Muluneh, Director of IGAD SSP and officially opened by H.E Sheikh Nur Mohamed Hassan Minister of Endowments and Religious Affairs.

In his welcoming remark, Commander Abebe Muluneh emphasized that Islamic values are closer to human nature, and are complimentary to his/her moral and spiritual evolution. The fundamental Islamic norms and values provide effectiveness and solidarity among the community, establishment and development; the values and philosophy stipulate a particular social constitution and interpersonal associations; taking temperance, restraint, harmony, serenity, forgiveness, and calmness as its fundamental principle as against hostility, antagonism and vengeance. He underscored that Islam makes firm love and brotherhood in the structure of society and puts forward the necessity of union and unity. It rejects decisive movements, which destroy the common values and sincerity between members of society, like tribalism, racialism, and negative nationalism.  The real and true teachings of Islam need to be understood and Counter those who provide the wrong and misinterpretation of the religion. Since the role of Imams are strongly significant, he strongly urges the Imams’ unlimited and unreserved engagement and involvement on DDRR approaches to counter terrorism.

E. Sheikh Nur Mohamed Hassan thanked to IGAD for conducting this crucial training for the Imams’, which will contribute the efforts of the peacekeeping mission of AMISOM & national military operations in the ground. The Minister mentioned that terrorists use youth in Somalia to foster perverted ideology in order to achieve their evil interests based on vandalism and violence. He further mentioned that It’s crucial to mention the sacrifice & tireless effort of our military & AMISOM forces those have spent their blood in fighting against Al Shabaab & Da’esh; but these efforts will succeed if Imams’ take their role to raise the religious awareness of mislead youngsters used by the terrorist groups. He hoped that this training will add value in the future national strategies for preventing & countering terrorism. H.E told to training participants that after completion of this training you are supposed to contribute significant contribution to the:

The political crisis in Somalia has become an opportunity for breeding of terrorist groups to establish a base, recruit terrorists and mobilize resources. The Somali Al-Qaida affiliate called Harakaat Al-Shabaab Al-Mujaahidiin) has been arguably the deadliest terrorist group in the greater Horn of Africa. Al Shabaab has lost important urban territories pushed by AMISOM and Somali Security Forces reducing its capability to mobilize resource including recruits. However, it  still control considerable territories in rural areas and has managed to stage successful serious attacks in Somalia and across borders and disseminating its extreme radical narratives that attracted supporters and sympathizers among vulnerable youth groups – less educated, unemployed and those who have grievances. IGAD’s ongoing interventions in building capacity of Somali state and non-state actors on counter radicalization, violent extremism lead to terrorism have proved that the role of community leaders, religious scholars, civil society organizations, local communities and families in collaboration with relevant government bodies is detrimental in the disengagement, deradicalization, rehabilitation and reintegration (DDRR) of AS fighters and its leaders, vulnerable groups and returnees.

The overall objectives of Imams’ training are building the capacity of Islamic leaders (Imams’) on DDRR approaches to counter terrorism, Al Shabaab and other terrorist fighters, and youth at risk of recruitment to terrorist and extremist forces.

The two weeks training will focus on topics like: role of IGAD to CT, IGAD PCVE Strategy, conceptualization of DDRR, Understanding terrorist ideologies, the role of Islamic concepts and fundamental principles, community based engagement initiatives, polices affecting the disengagement and reintegration, programs aimed at counter radicalization, targeting radical ideology, understanding the character and course of social movements, religious ideology mechanically causes terrorism, deradicalization as the social and psychological process, effective method of countering the threat of extremism and terrorism, ideologically reformed through deradicalization, deradicalization programs, how to challenge terrorists’, ideologies, narratives and messaging through religious dialogue and proper Islamic teachings, softening views and objectives using terrorism are illegitimate; immoral; and unjustifiable, alternative solutions on youth populations to be addressed in economics; education; and religion, short and long term rehabilitation programs, and possible recommendation for future engagement and the way forward.