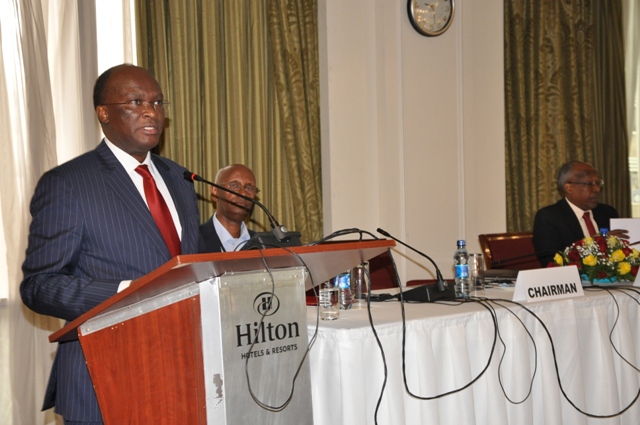 The workshop was officially opened by the Cabinet Secretary for the Ministry of Transport, Infrastructure, Housing and Urban Development of the Republic of Kenya, Hon. James Wainaina Macharia.

Hon. Macharia thanked IGAD for organizing the validation workshop and inviting stakeholders at the early stage of the study to get inputs to enrich and adopt the provisional Terms of Reference of the study and thereby allow stakeholders to own the results of the vital study.

He said that it was unwise for corridors to be developed individually by Member States in isolation, as this would neglect and isolate important and resourceful regions in the Horn of Africa. Therefore it is important for countries in the region to pull resources together and undertake key regional infrastructure projects.

On his part, Mr. Elsadig Abdalla while talking on behalf of the IGAD Executive Secretary, expressed his deep appreciation to Hon Macharia for accepting to officiate the opening of the workshop. He further extended IGAD’s gratitude to the Government of Kenya for accepting to host the workshop as well as AfDB and NEPAD for funding the workshop and many other various important projects in the region.

Mr Elsadig said he was hopeful that the output of the workshop would help address key regional infrastructure deficits, including provision of adequate transport and energy that are accessible and affordable; sustainable exploitation of energy and water resources with special emphasis on renewable sources.

He went on to say that the plan will be expected to enhance fair sharing of water resources amongst competing uses, as well as identify infrastructure interventions that should be affordable and implementable with resources mobilized even through Public Private Partnership (PPPs). He said he was optimistic that the Member States would validate the TORs to set the stage for the immediate commencement of the master plan studies.

On behalf of AfDB, Mr. Johannes Mtchera Chirwa commended IGAD for holding the workshop in order to ensure that IGAD Member States validate the design of the master plan study and its terms of reference for success of implementation of identified projects.

Mr. Chirwa pointed out that the involvement of the Member States in validating the TORS ensures ownership from the country level. He further stated that the master plan will facilitate more attainment of economic integration in the IGAD region and falls under the AfDB integration and development agenda to accelerate Africa’s economic transformation through – Light up and power Africa, Feed Africa, Integrate Africa, Industrialize Africa, and Improve the quality of life for the people of Africa.

During the workshop Member States of IGAD will review the draft TORs and validate them on 16th August, 2016 to set the way for commencement of the Infrastructure Master Plan studies.