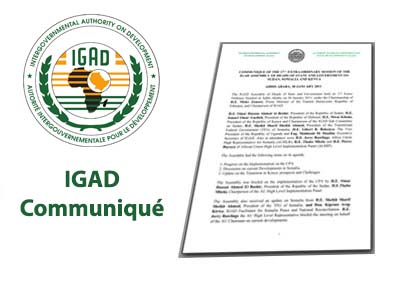 The Fifth Ministerial Meeting between the Intergovernmental Authority on Development (IGAD) and the European Union (EU) was held at the Ministry of Foreign Affairs of Ethiopia in Addis Ababa on the 3rd April 2012. The Ministerial meeting was co-chaired by His Excellency Ato Hailemariam Desalegn, Deputy Prime Minister and Minister for Foreign Affairs of the Federal Democratic Republic of Ethiopia, and incumbent Chairperson of the IGAD Council of Ministers, and H. E. Mr. Villy Søvndal, Minister for Foreign Affairs of Denmark on behalf of EU High Representative H.E. Ms. Catherine Ashton.

The EU recognised IGAD’s strategic role in regional integration, peace and stability in the Horn. IGAD welcomed EU’s stepped up engagement in the Horn of Africa, as testified by the adoption of a “Strategic Framework for the Horn of Africa” and the appointment of an EU Special Representative for the Horn of Africa. In responding to the inter-connectedness of the challenges, both sides underscored the need for comprehensive approaches. They exchanged views on ongoing work in the areas of promoting peace and security, regional infrastructure and energy, drought resilience, counter piracy and terrorism.The two parties discussed the follow up of the London Somalia conference.  They urged Somali leaders to take all necessary political steps in view of the end of the current transition in August, as agreed in London, and establishing a new political setting in the country. They also discussed the development of inclusive political and administrative arrangement in the newly liberated areas.

The two sides expressed support for the AUHIP led negotiations on outstanding issues between Sudan and South Sudan. They acknowledged the importance of IGAD´s role including in the full implementation of the Comprehensive Peace Agreement (CPA) and the importance of a coherent and coordinated approach of the international community and regional actors in support of the current process to reach negotiated solutions on outstanding issues.

Both sides recognised that normalising Eritrea’s relations with the regional countries would be an important stabilizing factor for the region.

IGAD informed on its effort to further reform and revitalization. The EU expressed its readiness to support IGAD in these efforts.