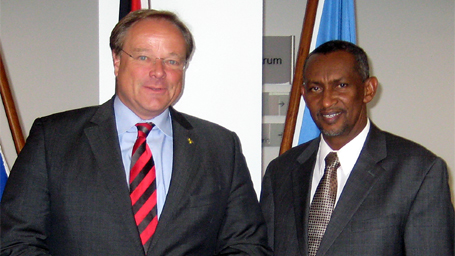 The Executive Secretary of IGAD, Engineer Mahboub Maalim on March 2nd 2012 met with the German Federal Minister for Economic Cooperation and Development, Mr. Dirk Niebel, at the Ministry Headquarters in Berlin City. The Minister reiterated the strategic importance of IGAD in coordinating efforts to develop and build resilience against future drought disasters in the Horn of Africa. Mr. Niebel reconfirmed German’s offer of Euro 20 million in support of efforts towards ending drought emergencies in the Horn and Euro 3 million for capacity building of IGAD.

On his part, the Executive Secretary, Eng. Mahboub thanked Mr. Niebel for the warm welcome and hospitality accorded to him and his delegation, and hailed the longstanding partnership between Germany and IGAD spanning over two decades. Earlier on 1st March 2012, the Executive Secretary had attended an international workshop on building drought resilience in the Horn of Africa organized by the German Government. Among key partners attending the workshop were African Development Bank, European Union, USAID, Denmark, FAO, academia and civil society organisations.