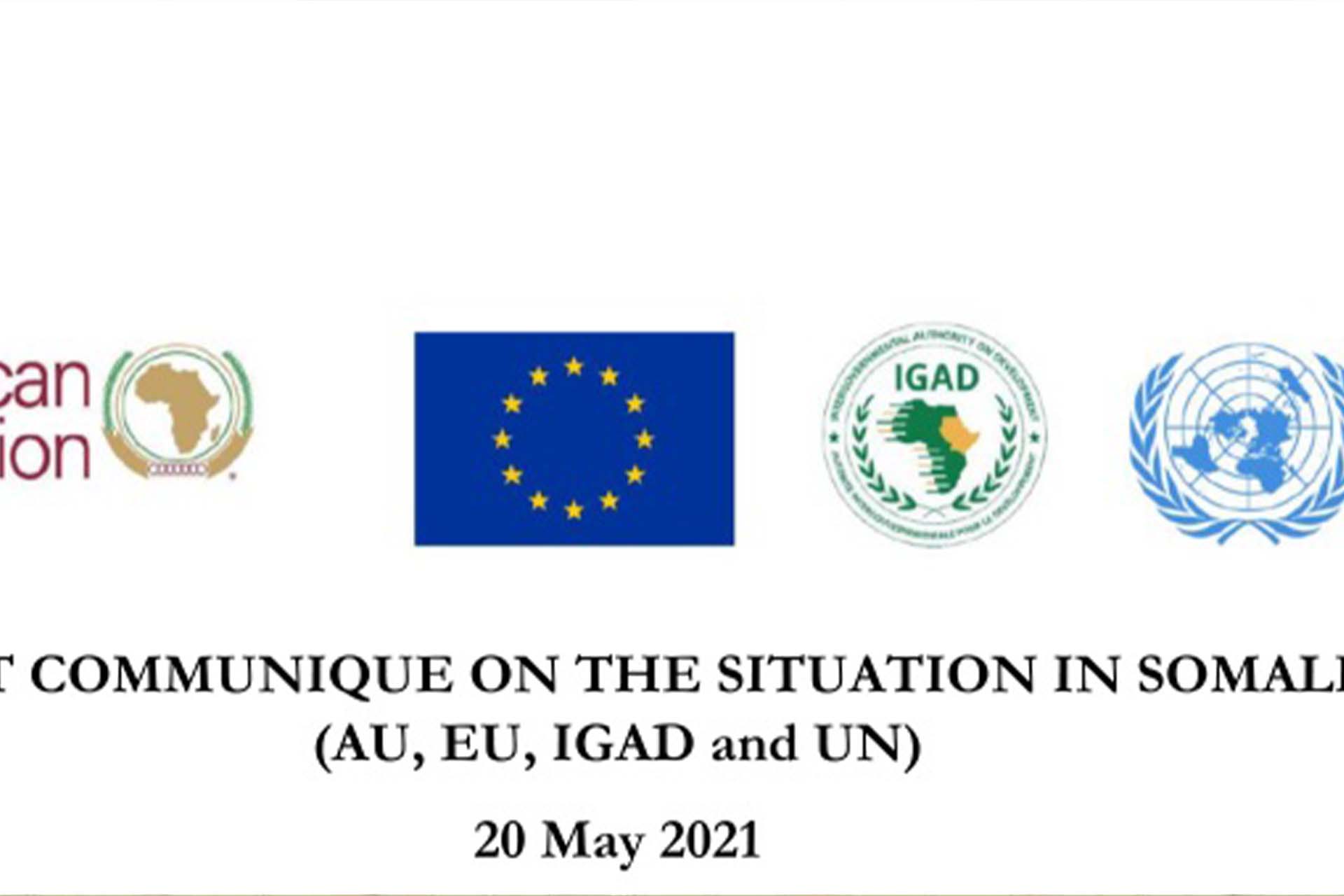 1)The African Union (AU), the European Union (EU), the Inter-Governmental Authority on Development (IGAD), and the United Nations (UN) continue to follow very closely the situation in Somalia. In this regard, a further virtual meeting was held on 18 May 2021, with the participation of Dr. Workneh Gebeyehu, Executive Secretary of IGAD; H.E. Amb. Bankole Adeoye, AU Commissioner for Political Affairs, Peace and Security; H.E. Amb. Rita Laranjinha, European Union, Managing Director for Africa; and H.E. Rosemary DiCarlo, United Nations Under-Secretary-General for Political and Peace building Affairs.

2) Following these deliberations, the AU, the EU, the IGAD and the UN:

a) Reiterate their respect for the sovereignty, territorial integrity, political independence, and unity of Somalia;

b) Note the actions taken by President Mohamed Abdullahi Mohamed and the House of the People of the Somali Federal Parliament to reverse the decision of 12 April, thereby lowering tensions in Somalia;

c) Welcome the role given to Prime Minister Mohamed Hussein Roble to lead on security and election matters;

d) Commend the swift action taken by Prime Minister Roble to engage constructively with political and community leaders to stabilize the security situation in Mogadishu;

e) Express full support for the Prime Minister’s convening of a summit to resume dialogue; call upon the leaders of the Federal Government of Somalia and all the Federal Member States to participate in the summit in good faith and without preconditions; and encourage participants to work towards a consensual agreement on the implementation of the 17 September Agreement, including the 16 February recommendations of the Baidoa Technical Committee, which form a strong basis for the holding of elections without delay and with a clear timeline;

f) Emphasize that the summit represents a critical opportunity to move the country forward towards the holding of elections based on the 17 September Agreement; encourage the involvement of key stakeholders in discussions with the signatories of the Agreement; underscore that there should be no attempts to derail the process or obstruct agreement; and highlight the need for the establishment of an appropriate follow-up mechanism to sustain the implementation of the summit outcomes;

g) Reaffirm the previous decisions not to support any parallel process, partial elections, or new initiatives leading to any extension of prior mandates;

h) Deeply regret the decision by the leadership of the Federal Government of Somalia to reject the African Union High Representative for Somalia; and underscore the critical role of the AU in promoting peace and security in Somalia, including through the immense contribution of AMISOM;

i) Strongly encourage the Somali leaders to develop a concrete plan for the implementation of the minimum 30% women’s quota, emphasizing the importance of safeguarding women’s political rights and strengthening their political participation;

j) Emphasize the importance of the success of the upcoming summit; and strongly urge all Somali leaders to prioritize and participate in dialogue, exercise maximum restraint, and refrain from any actions that will further escalate tensions or lead to confrontation.

3) The African Union, the European Union, the Inter-Governmental Authority on Development, and the United Nations will continue to monitor closely the situation in Somalia.