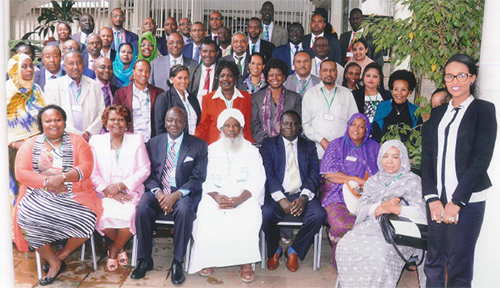 The training workshop was organized for Parliamentarians of IGAD member States. As IGAD is gender sensitive organization, separate invitation was extended to the Gender Affairs Committees in the respective National Parliaments to ensure their participation.

The workshop was officially opened by Hon. Jakoyo Midiwo Representative of National Parliament of the Republic of Kenya. Opening remarks were delivered by Ambassador Mahboub Maalim, IGAD Executive Secretary, and by the representative of the AFRICAN Union Commission, Mr. Mbari Calixte Aristide.

The three days training workshop is aimed at strengthening the institutional capacity of the national Parliaments of IGAD member States in the area of Democracy, Governance and Election. The training is conducted based on the African Union Commission Charter on Democracy, Election and Governance.

The Charter was adopted on January 30, 2007 by the Assembly of Heads of State and Government of the African Union and entered into force on February 15, 2012.