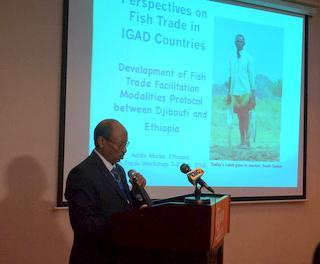 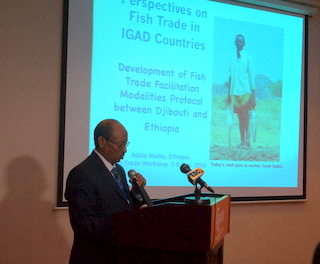 Mr. Mohamed Moussa during the Opening of the Progress Review Fish Trade Work

Addis Ababa, 7th December, 2015 – The Intergovernmental Authority on Development (IGAD) together with fish experts from the IGAD Member States are meeting in Addis Ababa between December 7th and 8th, 2015 to share experiences as well as review and assess a Trade Agreement study for enhanced and facilitated fish trade between Ethiopia and Djibouti that can later be replicated to other IGAD Member States.

The opening of the two-days workshop was presided over by Mr. Haileselassie Weres, Director General of Ethiopian Meat and Dairy Industry Development Institute in the presence of Mr. Mohamed Moussa representing the IGAD Executive Secretary and Mr. Chris Short, a Fish Trade Expert with SmartFish at Indian Ocean Commission (IOC).

He requested the representatives of Member States to exploit the existing resources that the IGAD region is endowed with for better livelihoods, economic sustainability, employment for the youth hence less conflict and poverty in the IGAD region.

In the same spirit, Mr. Chris Short pledged support from SmartFish towards working together with IGAD to fulfill its pledge of economic integration. He called for practicability of the policies and plans drafted in agreement and cooperation for the benefit of all parties involved.

On his part, Mr. Haileselassie Weres welcomed IGAD’s efforts towards peace, cooperation and economic relations between Member States and acknowledged that Ethiopia like many IGAD countries has great potential for increased livestock and fisheries production but can only be through interregional fish trade.

According Dr. James Miller, the lead researcher of the study stated that unless the existing limitations and challenges such as; illegal fish trade, weak penalties to fish mongers, incapacity to supply the high demand, leading to alarming numbers of fish imports than exports, poor sanitation and handling of fish, poor or no technology, corruption, pastoralist food habit towards livestock meat minimal law enforcement on existing standards and controls applied in the IGAD region, poor mobility, handling of fish and transportation, limited information and research on statistics, minimal or no market linkages and minimal or no government support are dealt with fish trade and production will continue to be ‘a dream so close yet far away’ .

Dr. Miller as well as the participants agreed that through; a) improved governance systems and harmonization of standards, policies and certifications b) faster customs and improved border relations, c) Improved transport and storage, d) strong policies against importation of fish outside the IGAD region, e) adaptation of new fish farming methods and technologies f) adaption to low cost and efficient operations that are to world standard g) regular meetings and information sharing between the IGAD Member States, h) training of the communities on fish nutritional benefits and market linkages through improved communication channels such as mobile and internet technology, i) take on commercial fish farming vis a vis subsistence farming that is commonly practiced by fish farmers in the IGAD region.

The IGAD region therefore, with no doubt has the capacity to supply fish for both local and export market because of its unique and rich placement on the continent with fish resources and other wide ranges of aquatic habitats as well as the East African Rift Valley, Nile River Basin, lakes and rivers to mention but a few.