IGAD STATEMENT ON THE BOMB ATTACK AGAINST THE UN STAFF IN GAROWE, SOMALIA BY THE TERRORIST GROUP AL SHABAAB

Home » IGAD STATEMENT ON THE BOMB ATTACK AGAINST THE UN STAFF IN GAROWE, SOMALIA BY THE TERRORIST GROUP AL SHABAAB 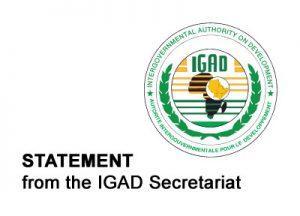 The terrorist group Al shabab have downgraded themselves from being killers of young people to becoming the destroyers of children’s future and wellbeing by attacking a bus that was in the service of the UN arm UNICEF that is engaged in looking after children who were victims of war.

On Monday, the 20th of April 2015, the Al Shabab engaged in yet another atrocity by setting a large bomb on a bus in the Somali town of Garowe killing six UN workers four of whom were UNICEF staff while two were Somali nationals. Seven others were also wounded in this attack.

The President of the Federal Republic of Somalia H.E Mr. Hassan Sheikh Mohamud has strongly condemned the latest atrocity which he called a “brutal attack”. He rightly stressed that “in attacking UNICEF the Al Shabab have also attacked Somali Children” and the future of the country.

The Al Shabab have claimed responsibility for this despicable act and also stated that the UN is a colonizing force proving that it understands nothing and belongs nowhere.
The Intergovernmental Authority on Development, IGAD condemns this atrocious act in the strongest terms possible and offers its condolences to the people and Government of the Federal Republic of Somalia and the families of the victims who lost their precious lives in this act of terror.

No matter how cruel and intimidating their actions, the Al Shabab should know that their days are numbered for history has shown that no force that destroys innocent lives has any future.