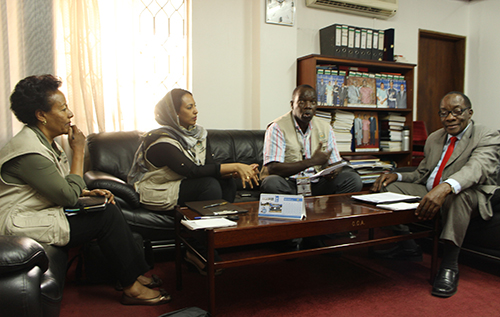 Kampala, 13-02-2016: Following the invitation extended to the Inter-Governmental Authority on Development (IGAD) by the Electoral Commission of Uganda, IGAD has deployed an Election Observer Mission (IGAD-EOM) to Uganda to observe the Presidential and Parliamentary Elections to be held on February 18th, 2016.

The advance team of the IGAD-EOM to Uganda, led by Mr. Yufnalis Okubo- IGAD Legal Council, arrived in Uganda on February 11th, 2016 and the remaining members of IGAD Observers team will arrive in Kampala on February 14th, 2016.

Upon arrival on February 12th, the IGAD-EOM Advance Team to Uganda started meeting with officials of the Ministry of Foreign Affairs of Uganda including the Head of the East African Community and Ring States Department, Mr. Baiga Jeffrey, in his office for the purpose of being accredited to the elections as Observers.

On the same day, the Team then met with the Chairperson of the Electoral Commission, Eng. Dr. Badru Kiggundu in his office.

Today, the Team embarked on meeting political parties and other key stakeholders and hold consultations and briefings with relevant authorities.

The objective of the IGAD Election Observer Missions is to assist member states in their efforts to conduct free and fair elections by providing positive and constructive feedback that would help to improve similar processes in the region. IGAD Election Observer Missions are meant to facilitate the gradual development of a democratic election culture in our region. ###