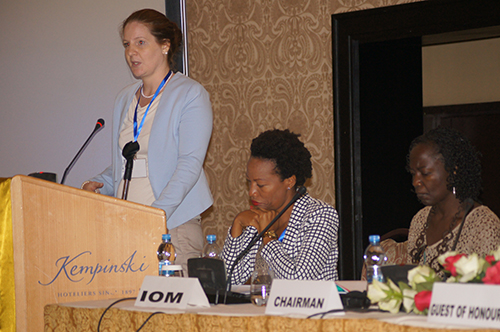 28 October 2015, Djibouti, Djibouti: Member States of the Intergovernmental Authority on Development resolved today to redouble their efforts to combat trafficking in persons and smuggling of migrants during the 6th Meeting of the Regional Consultative Process on Migration held in Djibouti.

Making a statement on behalf of the Executive Secretary, the Program Manager in charge of Health and Social Services at the IGAD Secretariat, Ms. Fathia Alwan pointed out that inter-state cooperation in the region remains weak in the fight against trafficking in persons and smuggling of migrants.

“We need more cooperation both at the bilateral level and also the multilateral level between countries of origin, transit and destination,” She stated, adding that it is crucial for various initiatives to build synergies in addressing the root causes of irregular migration and trafficking in persons and avoid duplication of efforts.

Opening the two-day meeting that brought together delegates from IGAD Member States, UN agencies, the African Union, the civil society, academia and development partners, Col. Abdoulkader Ibrahim Gona from the Directorate of General Information and Immigration in the Djiboutian Ministry of Interior, urged the delegates to translate the talking into action. He further called upon countries of origin, transit and destination to engage in honest conversations to address the menace.

“Without addressing the push factors and challenges of regular migration, human trafficking and smuggling of migrants will continue unabated,” he observed.

In her maiden statement, the newly appointed Representative of the International Organization for Migration (IOM) to IGAD, Ms. Maureen Achieng cited lack of economic opportunities, unemployment, conflicts, natural disasters and poverty as some of the push factors, adding that the possibility of a greener pasture in different locations, from South Africa to the Middle East and Europe, make a number of East Africans risk their lives in search of a better future.

“Human trafficking and smuggling of migrants is a multi-billion dollar business worldwide” she stated, lamenting that the criminal networks operating in that realm make profits at the expense of indescribable human suffering. Given the transnational nature of these crimes, the IOM Chief of Mission based in Addis Ababa reiterated the need for cooperation and strong collaboration among governments to bring criminals to justice, but also to set up prevention mechanisms and provide protection to migrant victims.

The Regional Specialist on Migration at the Swiss Embassy in Khartoum, Ms. Martina de Kaenel commended the strategic partnership between her government and IGAD addressing issues ranging from migration collaboration, peace and security to drought resilience and science.

“Beyond raising awareness and consciousness about these crimes, we have to enact laws that criminalize these activities,” she pointed out, stating the her country did so in 2011 and further ascended to the European Council Convention on Actions against Trafficking in Persons the following year, as well as establish a National Action Plan.###