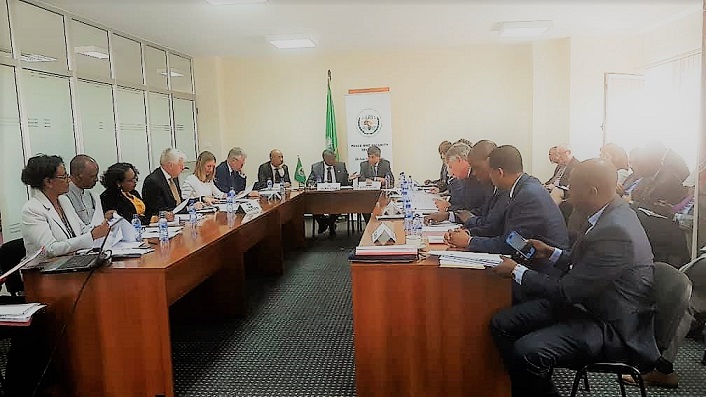 22-02-2019, Addis Ababa, Ethiopia: The Intergovernmental Authority on Development (IGAD) this morning constituted a Steering Committee for the implementation of a multi thematic program under “IGAD Promoting Peace and Stability in the Horn of Africa Region – (IPPSHAR)” being implemented by the IGAD Peace and Security Division.

The IPPSHAR Steering Committee is composed of IGAD, represented by the Executive Secretary and funding partners such as; The European Union Delegation to the African Union, Austrian Development Agency (ADA), Swedish International Development Cooperation Agency (Sida) and Government of the Netherlands, who are represented at Ambassadorial level. It is chaired by the IGAD Executive Secretary and co-chaired by the Austrian Ambassador.

H.E Amb (Eng) Mahboub Maalim, the IGAD Executive Secretary expressed his appreciation to the European Union and the other Development partners that have contributed to this programme and also thanked the Austrian Development Agency for taking this responsibility.

Amb Maalim stressed the readiness and commitment of IGAD and its member states to effectively implement this programme for the benefit of the IGAD citizens.

As Co-chair, Amb. Roland Hauser, the Austrian Ambassador to Ethiopia and IGAD,  expressed his gratitude to IGAD and the funding partners  and emphasised his commitment to the responsibility that ADA has taken up for the management of the programme. He stressed in particular that IPPSHAR will undertake activities and create partnerships that will increase the participation of women in peace processes – an important topic for the Austrian Foreign Minister – and reach citizens on the ground.

The Head of EU Delegation to the African Union, H.E Amb. Ranieri Sabatucci called upon the partners to praise IGAD’s predictive indicative power on the relevancy of IPPSHAR which is more timely now considering the winds of change in the region.

Amb. Sabatucci recommitted EU’s support and belief towards peace in Africa and its artichecture. He called on IGAD member states to integrate to achieve peace and stability.

The Committee has been established to safeguard that the IPPSHAR project is in line with the IGAD Regional Peace and Security Strategy (2016-2020) as well as to ensure that achievements are in line with the purposes of the EU Trust Fund and the respective policies of the co-funding development partners.

The Committee’s overall objective is to provide oversight and strategic guidance to ensure that project implementation adheres to the agreements reached between all funding and implementation partners.

The Committee shall meet twice a year to review the status of implementation, provide strategic guidance in a changing policy and geo-political environment, review and approve work plans and reports and discuss strategic issues, including possible amendments to the Delegation Agreement, as well as make recommendations for the programme to mention but a few.

The IPPSHAR programme is financed by the EU Emergency Trust Fund for Africa (EUTF) and co-financed by the European Union, the Austrian Development Agency (ADA), the Swedish International Development Cooperation Agency (SIDA) and the Government of the Netherlands.

The Austrian Development Agency (ADA) was delegated by the EU to manage the EU’s contribution to the programme through an indirect management mode.

The aim of IPPSHAR is to contribute to achieving sustainable peace, security and stability for the attainment of economic integration and development of the IGAD region.