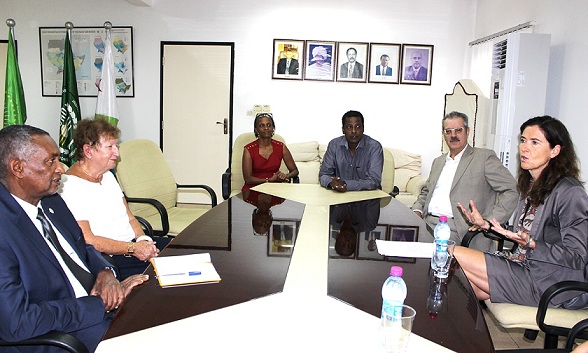 26 February 2019, DJIBOUTI, Djibouti: The Executive Secretary of the Intergovernmental Authority on Development (IGAD), H.E. Amb (Eng) Mahboub Maalim, this morning received the accreditation letter from the Ambassador of Germany to Djibouti, H.E. Ms Anke Holstein, that makes her the first German Ambassador ever to be accredited to the regional organisation.

The Executive Secretary noted the extended portfolio of projects and programmes IGAD and Germany have been entertaining from the start. “Your accreditation is more than timely and I am so delighted to see that we will be able to deepen furthermore our working relations”, he said. Amb Maalim described the accreditation as a “historic moment”. He added that Germany also had strong bilateral ties with IGAD Member States.

Ambassador Holstein noted that IGAD assumed “political responsibility for the region” and contributed “significantly to its further peaceful development”. She recalled that, so far, the portfolio of Germany-IGAD bilateral cooperation amounted to 142 Million Euros.

Ambassador Holstein pledged to “continuing the very fruitful cooperation” between Germany and IGAD.