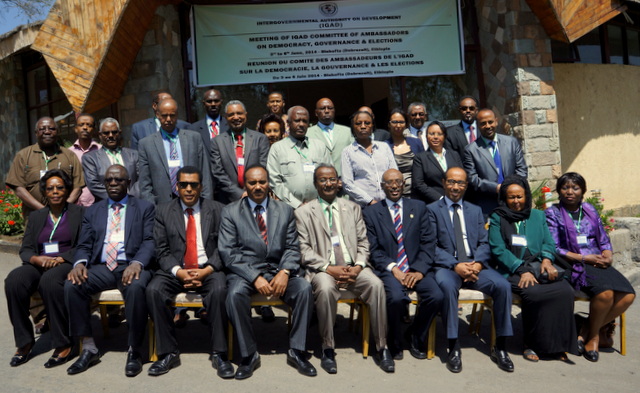 (IGAD – Addis Ababa) The Committee of Ambassadors of IGAD convened a three day meeting on Democracy, Governance and Elections in Bishoftu, Ethiopia.

Ambassador Tewelde Redda, IGAD’s  Director of Peace and Security said, “Lack of democracy, good governance, credible elections and respect for human and peoples’ right are potential sources for intra- state and inter – state conflicts the world over.” The Director underscored the devastating effects on the political, economic and social development of the country or the region in which they occur.

Taking in to consideration the linkage between democracy good governance, conduct of credible elections and respect for human rights and sustainable peace and stability, the Secretariat decided to step up its involvement in the area and to this effect facilitated the establishment of the Political Affairs Program (PAP) in 2008.

“The objective of the Program, is to contribute to the prevalence of sustainable peace in the IGAD region, by preventing conflicts from arising due to gaps in Democracy, Governance and Election, thereby creating enabling political environment for achieving the ultimate objective of regional integration,” said Messeret Tilaye, the Program Manager for Political Affairs.

Ambassador Suleiman Dedefo, Ethiopia’s ambassador to Djibouti and Chairman of the Committee of the Ambassadors said, “The instability and insecurity are deep-rooted in absence of good governance and democracy. The quest for democracy should not be seen as choice of political systems, but an issue of survival in every society, particularly in the multicultural countries of IGAD region.”

Ambassador Dina Mufti, the guest of honor of the meeting said, “IGAD region faces immense challenges that constrain the realization of peace, security and stability.” He called on the organization to develop commonly agreed regional instrument as means of minimizing the challenges.

“We in Ethiopia believe that these efforts will contribute their share for enhanced peace, security and stability,” said Ambassador Mufti.