Ambassador Maalim thanked the U.S. delegation for this working visit that focused on building resilience of the communities in the IGAD region. The two parties discussed about the outcomes of the Resilience Summit of Kampala held in March 2014. They agreed that though the USAID-funded IGAD Drought Disaster Resilience and Sustainability Initiative (IDDRSI) has been progressing well, achievements in resilience-building needed to be measured.

Both parties were convinced that this Initiative is bound to be a success.

The alarming humanitarian situations in South Sudan and Somalia were also mentioned and given due attention during the meeting.

Earlier in the morning, Ambassador Maalim received the newly appointed Ambassador of India to Ethiopia and Djibouti, and Permanent Representative to the African Union, HEM Sanjay Verna, accompanied by the Honorary Consul for India with Residence in Djibouti, HEM Nalin Kothari.

During his courtesy call, the Indian Ambassador lauded the role played by IGAD in the regional matters and wished further collaboration between his country and IGAD; to which, Ambassador Maalim expressed satisfaction and his belief that relations between India and IGAD will go stronger. 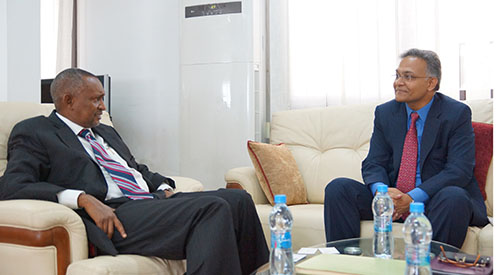