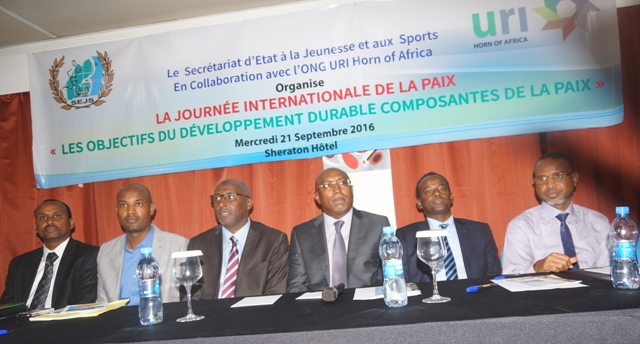 21-09-2016, Djibouti:
As the world commemorates the International Day of Peace today September 21, 2016, IGAD reflects on its active engagement in conflict and post conflict countries as well as facilitation of successful conclusions of several peace initiatives to restore and maintain peace, security and stability in the IGAD region.

Through the Peace and security Division, IGAD has constantly enhanced its and Member States’  predictive and preventive capabilities to respond to and resolve conflicts in order to contribute to the promotion of peaceful and inclusive society in the IGAD region.

IGAD has been actively engaged in mediating the South Sudan internal violent conflict since its outbreak in December 2013. The IGAD led mediation has resulted in the signing of two important agreements on Cessation of Hostilities (CoH) and on the Status of the Detainees which have marked major milestones in the IGAD-led South Sudan peace process and provided the ground work for the signing of the Agreement on the Resolution of the Conflict in the Republic of South Sudan in August 2015. The signing of the latest agreement came after the expansion of the IGAD led mediation to IGAD-PLUS to include the African Union (AU), UN, China, US, UK, European Union (EU), Norway and the IGAD Partners Forum (IPF). IGAD will continue to be involved in overseeing the implementation of the agreement to bring the devastating conflict in South Sudan to an end.

IGAD on September 13, 2016 facilitated the 28th Extra Ordinary Summit of Heads of State and Government of IGAD Member States in Mogadishu, Somalia. The convening of this Summit is considered to be an important landmark in IGAD’s effort to maintain and promote peace and stability in Somalia and the rest of the IGAD region. IGAD has also facilitated the formation of four regional administrations of Somalia and their corresponding assemblies through systematic internal reconciliation processes and the formation of the fifth regional administration is underway.  The establishment of regional administrations and assemblies will set the basis for the upcoming election in Somalia.

The IGAD Somalia Facilitation Office together with other regional and international partner have also supported the recruitment and training of local security officials and formation of a structured Somalia National Army. IGAD is relentlessly working to strengthen the capacity of the newly formed regional administrations and the Federal Government of Somalia to establish stable and representative federal political system in Somalia.

IGAD has enhanced its Conflict Early Warning and Response Mechanism (CEWARN) to serve as a principal platform for regional cooperation on conflict prevention and mitigation through data-based early warning and response in the IGAD region.

CEWARN has done a number of upgrades on the CEWARN Reporter to expand its conflict monitoring and mapping in terms of geographical area and coverage of conflict typologies. The new CEWARN Reporter  has enabled CEWARN to track, categorize and analyze large volumes of conflict early warning data from the region. CEWARN has further strengthen its data collection and early response by fully operationalizing Conflict Early Warning and Response Units (CEWERUs) in all IGAD Member States and steadily expanding its areas of operation in the cross-border areas of all Member States particularly in the Karamoja and Somali Clusters (i.e. the cross border areas of Ethiopia, Kenya, South Sudan and Uganda as well as Ethiopia, Kenya and Somalia respectively.

CEWARN has also established a Rapid Response Fund (RRF) to support communal peace dialogue promotion and modest local developmental projects that are intended to be catalysts for longer-term structural and policy responses to conflicts. Under the RRF, CEWARN has undertaken successful peace building projects along the border areas of Djibouti-Ethiopia; in Karamoja Cluster and Somali Cluster. In addition, to address the root causes of violent conflicts in the IGAD region a mechanism is being developed to effectively transmit CEWARN’s analytical products to high level policy and decision makers.

Furthermore, IGAD  established a Mediation Support Unit (MSU) in Peace and Security Division to institutionalize mediation efforts and strengthen the institutional and normative capacity of IGAD in the areas of preventive diplomacy and mediation. IGAD has created a roster of 21 mediators, comprising experienced diplomats and respected public figures from IGAD Member States. In addition a regional mediation strategy which will guide the mediation efforts is expected to be finalized and validated by the end of 2016.

IGAD Peace and Security Division has launched IGAD Security Sector Programme (ISSP) , as a successor of IGAD Capacity Building Program Against Terrorism (ICPAT), to contend with Existing, Emerging and Evolving Transnational Security Threats (EEE – TSTs) in the region, inter alia terrorism, piracy, cybercrime, human trafficking, and illicit financial and arms flow. ISSP has undertaken series of studies and researches with the objective of providing policy recommendations and highlighting key steps required for countering Transnational Security Threats in the region. The study on the criminal networks and methods of human smuggling and trafficking from the Horn of Africa through the Central Mediterranean Sea conducted by ISSP has been widely used to identify the kingpins of the criminal syndicate and their networks that extend from Europe to Africa and the key routes and lines of smuggling/trafficking. ISSP also conducted a remarkable study entitled “Transnational Security Threat: the Case of Al Shabaab” that has subsequently been submitted to the UN Security Council Sanctions Committee.

In addition, ISSP jointly with  Somalia Facilitation Office is engaging the youth, women, elders and religious leaders from Somalia on de-radicalization, disengagement and reintegration as part of the the Counter Violent Extremism effort in the Region. As part of establishing a policy basis for countering TSTs, ISSP formulated a Regional Convention on Mutual Legal Assistance and Extraditions that has been so far ratified by the Republic of Djibouti and the Federal Democratic Republic of Ethiopia and an integrated IGAD Maritime Strategy that has been validated and submitted to policy organs for adoption.

IGAD through the Political Affairs Programme has also been assisting Member States in their efforts to address issues of governance and elections in order to prevent outbreak of conflicts and promote and maintain peace and security in the region. In this framework, IGAD has developed Protocol on Democracy, Governance and Election and a Regional Code of Conduct and Guideline on Election. After thorough consultation with Member States, IGAD Political Affairs Programme has launched federalism and decentralization as a model of governance in Member States to accommodate diversity, promote good governance and democracy and build effective, accountable and inclusive institutions at all levels.

IGAD rightly recognizes the indivisible linkages between peace, security and development and therefore it is committed to contribute to the reduction of all forms of violent conflicts in the region in order to establish enabling circumstances for inclusive growth, integration and sustainable development.