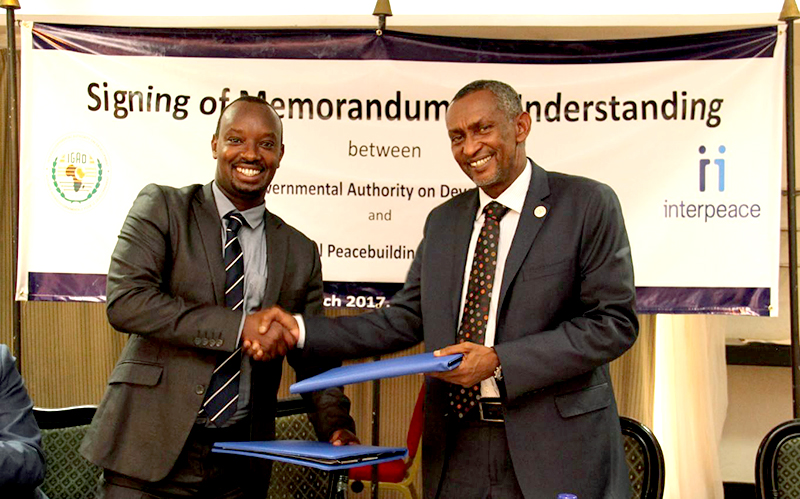 The Intergovernmental Authority on Development (IGAD) has signed a Memorandum of Understanding (MOU) with Interpeace to work together on peace initiatives in Eastern Africa and the Horn of Africa.

“This is a first step towards a fruitful long journey,” Interpeace’s Regional Director for Eastern and Central Africa, Jean Paul Mugiraneza, remarked after the signing. “This MOU gives us the framework to work together, to be innovative and to help make the region safer and more peaceful.”

IGAD is a Regional Economic Community (REC), established in 1986 with a mandate for regional economic cooperation and development. Its eight member states are Djibouti, Eritrea, Ethiopia, Kenya, Somalia, South Sudan, Sudan and Uganda.
Interpeace’s Senior Advisor for Eastern and Central Africa, Johan Svensson, lauded IGAD’s efforts in tackling conflicts within the region and expressed optimism that the newly formalised collaboration between the two organisations would be fruitful.
“I have had the opportunity follow the work and achievements of IGAD in many conflict zones, not least in Somalia and South Sudan, where IGAD has been on the forefront working for peace,” Mr Svensson said. “Interpeace’s long experience, coupled with IGAD’s standing as a leading regional organisation, presents a good combination for peacebuilding in the Horn of Africa.”

On his part, IGAD Executive Secretary Ambassador Mahboub Maalim underscored some of the most pressing challenges facing peace, security and development in the region.

“Peace and security in this region is important but can be elusive and recurrent. There are resource conflicts, political conflicts, and conflicts over inadequate borderlands development. Another thing is that across the countries we need to address issues of infrastructure, early warning systems, faster policy level decisions and enhanced mediation and diplomacy. We also need to tackle emerging crimes such as violent extremism, money laundering and human trafficking linked to migration and violent extremism,” Ambassador Maalim said.

Interpeace is an international peacebuilding organisation created by the United Nations in 1994 to find innovative solutions to conflict. The organisation currently implements peacebuilding programmes in 21 countries across the world in strategic partnership with the UN. Interpeace has worked with local partners in Somalia for over 20 years to support and advance peacebuilding and statebuilding processes, building on pre-existing resilience factors among the local communities.

Within the IGAD region, Interpeace has supported peacebuilding and statebuilding processes in Somalia for over two decades. In Kenya, Interpeace collaborates with the National Cohesion and Integration Commission (NCIC) to implement a peacebuilding programme in Mandera County, along the country’s tri-border area with Somalia and Ethiopia. It is hoped that Interpeace’s work in Mandera County could spawn further initiatives for sustainable peace in the broader Mandera Triangle, where the three countries converge geographically.

Alluding to the potential opportunities for synergy in the new collaboration between the two organisations, Ambassador Maalim welcomed Interpeace to work closely with IGAD.

“We want to partner with Interpeace as much as possible. If there is an area that Interpeace thinks IGAD can do better, or can do together with Interpeace, please feel free to bring it to our attention as legitimised by this MOU,” he concluded.