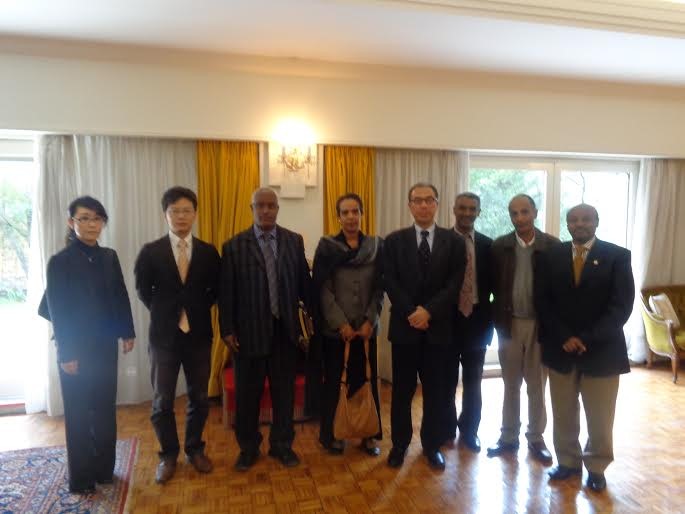 Visiting the Japanese Ambassador to Ethiopia

An IGAD delegation paid a courtesy visit to the Japanese Embassy in Addis Ababa on Wednesday, 22nd July 2014.

Led by Ms. Fathia Alwan, the Program Manager for Health and Social Development at the IGAD Secretariat, the five-member delegation was received by H. E. Suzuki, the Ambassador of Japan to Ethiopia, at his Residence.

The IGAD Delegation briefed the Ambassador on the upcoming IGAD International Scientific Conference on Health (IISCH) and on the various activities of IGAD in promoting cross-border and international cooperation on health and social development as foundations for peace and stability in the region.

The Ambassador appreciated the visit and commended the efforts of IGAD in addressing the pressing needs of people in the region. He also stressed the need to develop specific and focused programs by selecting cases that have a potential for attracting the attention of both Japan and IGAD member states.

Prior to visiting the Ambassador, the IGAD Team had earlier held a brief consultative meeting on 18th July 2014 with Mr Jin Kimiaki, Chief Representative of Japan International Cooperation Agency (JICA) in Ethiopia.

Based on the discussions with both the Ambassador and Mr Kimiaki, it was agreed to further explore:

• The participation of high-level Japanese experts in some of the panel discussions during the upcoming International Scientific Conference on Health;

• Possible contribution of the Government of Japan to the successful convening of the conference; and

• Programs for long-term cooperation between IGAD and the Government of Japan on health and human security with particular emphasis on refugees, IDPs, and cross-border mobile populations in South Sudan, Somalia, Kenya, Ethiopia, and Sudan.