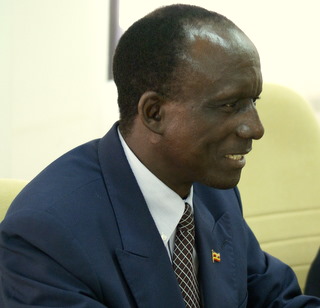 (IGAD  – Djibouti) On Sunday November 23, 2008 Mr. Daniel Yifru, Director of IGAD Peace and Security Division accepted the letter of credence from H.E. Mr. Mull Sebujja Katende, Uganda’s Ambassador to Ethiopia and Djibouti who is also the Permanent Representative to the AU, IGAD and UNECA.

The discussion included issues of peace and security in the region and particularly IGAD’s peace efforts in Somalia and Sudan and the role played by Uganda. While reiterating Uganda’s commitment to IGAD the Ambassador informed that Uganda is the current chair of the AU Peace and Security Council as well as the UN Security Council. Mr. Yifru, thanked the government of Uganda for its commitment to IGAD and the region at large. He said IGAD secretariat is delighted to receive the credentials of Ambassador Katende, a career diplomat who has a long standing association with the Secretariat and the