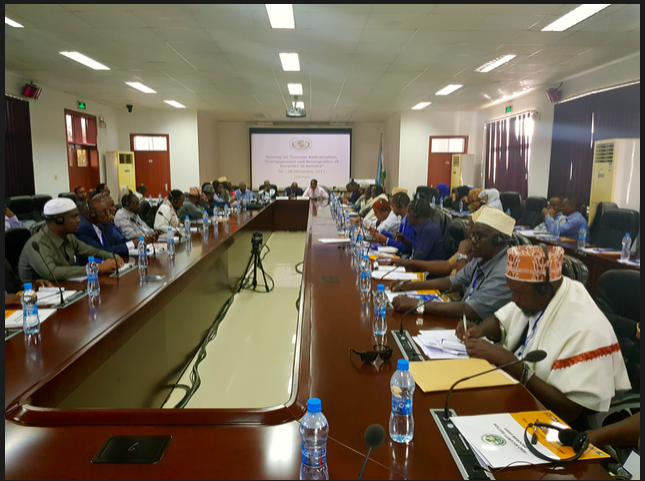 Training for Somalia Religious Scholars and traditional Leaders on Counter Radicalization, Disengagement, and Reintegration of Terrorists

The official opening ceremony was presided by Commander Abebe Muluneh, Director of IGAD SSP, who welcomed the participants and by Ambassador Tewolde Gebremeskel Director of IGAD Peace and Security Division who officially opened the training. Sheikh Ali Dahir, speaking on behalf of the Government of Somalia and the delegation, applauded IGAD and the support for Somalia especially in organizing such kind of training that brought together scholars for common understanding in defeating Al-Shabaab.

Commander Abebe, in his opening remark, expressed his gratitude to the Government of Djibouti for Hosting and the Government of Japan for their generous financial support in making the training a reality. He further highlighted that the militant group Harakaat al-Shabaab al-Mujaahidiin (Al-Shabaab) remains the most immediate threat to the peace, security and stability of Somalia and the region. Major offensive operations by the African Union Mission in Somalia (AMISOM) and the Somali National Army against Al-Shabaab have equivocated since July 2015, which marked the last phase of Operation of Juba Corridor. Although the Government of Somalia with regional and international support are doing a lot in tackling Al-Shabaab, the terrorist group continues to carry out regular complex attacks in Mogadishu, typically by deploying a vehicle-borne improvised explosive device followed by an assault by four to five so-called suicide gunmen, against hotels and restaurants. One of the deadliest attack in Somalia’s history was on 14 October 2017 through a massive blast caused by a truck bombing in Mogadishu killing at least 512 and insuring 316. Commander Abebe pointed out that engaging with key community members that include religious leaders, the youth, and women hand in hand is very important in tackling the narratives and messaging of Al-Shabaab.

The objective of the training is to contribute to the fight against radicalization and countering terrorism in Somalia by providing knowledge, tools, and common understanding to traditional leaders in mobilizing the community through counter radical narrative that familiarize the dangers of religious extremism messages of Al-Shabaab. The training brought together 50 participants from all the regions of Somalia who are religious scholars, representatives of CSO from women association, and ministries such as the religious affairs, interior, and defense. High level and well-versed religious sheiks are expected to share their knowledge and experiences as well as form a common understanding on the various aspects of the subject matter. Accordingly, the following topic and area of focus are laid out in the agenda for discussion and debate over the coming days: