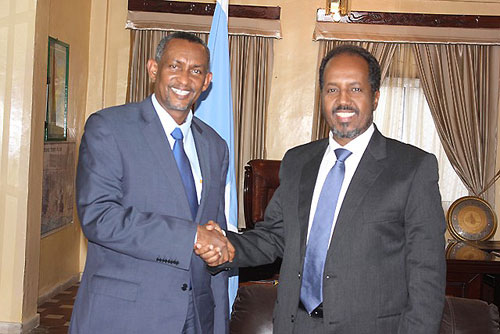 (Mogadishu, Somalia, November,04, 2012) The president of the Federal Republic of Somalia, H.E. Hassan Sheikh Mohamud yesterday met the IGAD Executive Secretary, Eng. Mahboub Maalim, at his office in Villa Somalia. The Executive Secretary with a high level delegation of IGAD visited Mogadishu for the second time in two weeks and had productive discussions with the president of Somalia that addressed issues of cooperation and support for Somalia, with an emphasis on security improvement in the country and the role of IGAD in assisting the Somali government. This second meeting comes as Somalia enters a new and historic phase of peace and stabilization.

The president hailed IGAD for its utmost cooperation and unwavering support in assisting Somalia continue on the path to peace and particularly welcomed its current efforts to restore peace and stability to Kismayu. It has been agreed to appoint of four Somali nationals who will represent and lead a committee on all relevant matters on behalf of the Federal Government in that regard.

As for the issue of the charcoal stockpile at the Kismayu port, the recent formation of the task force for that purpose has been fully welcomed and the president wished the team every success in its mission. The Task Force has a mandate of three days, with collaboration of AMISOM, to conduct a thorough assessment of the situation of the charcoal and has the following mandate:

• To determine source of the charcoal, ownership, quantity and estimated cost and why so much was accumulated in short time;
• To propose ways of using the charcoal in the internal market, including mode of transportation and other means to distribute to the different local markets;

Upon the completion of its mission and the return of the team, the formation of a joint task force with membership of IGAD, AU, UN and other concerned organizations will be followed for the furtherance of the issue as well as the broader perspective of bringing enduring solution to the situation of Kismayu.

The meeting has welcomed the humanitarian role the government is playing as it recently dispatched a vessel laden with some basic aid supplies to Kismayu. Another vessel carrying similar aid provisions will be sent off to Kismayu in the coming days.
-END-
Communication Office
Office of the Somali President
Mogadishu, Somalia