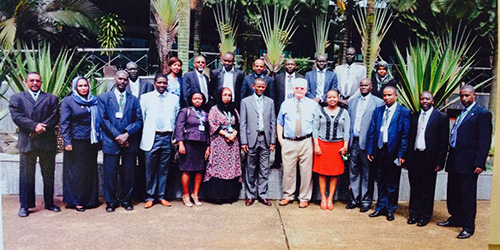 Entebbe, 31 October 2014 – IGAD Security Sector Program (ISSP) held a three days validation workshop of the Task Force Report on the Establishment of a Regional Centre for Cooperation and Coordination on Existing, Evolving and Emerging Transnational Security held on 28-30 October 2014 in Entebbe, Uganda. Commander Abebe Muluneh, the Head of ISSP, officially opened the meeting.  Dr. Simon Nyambura, the Counter Terrorism Pillar Head at ISSP chaired the meeting with the facilitation of ISSP Pillar Heads and the IGAD Secretariat Legal Counsel.

The ISSP Task Force was officially commissioned at a meeting in Addis Ababa, Ethiopia, on 29 April 2014 and commenced its programme of work on 16 May 2014.  The Task Force mandate was to explore the viability of establishment of a regional center to promote greater regional cooperation in countering transnational security threats (TSTs). Following extensive and various consultations with delegations from IGAD member states, and other key stakeholders at national, regional and international levels, the Task Force submitted its Report to ISSP, which the latter presented it for validation by the respective Member States.

The objective of this validation workshop was for state and non-state actors to receive the findings of the research from the Task Force, and thereafter make a critical analysis of the findings with an aim to enrich the report.

The level of participation was excellent with a total of forty five (45) participants representing IGAD Member States. Senior Officials from the Parliament, Ministry of Foreign Affairs, law enforcement agencies, Directorate of Public Prosecutions, Office of Attorney General, Ministry of Justice, SNCTC, and External Service Organization were in attendance.  Regional Experts with academic and practical backgrounds critiqued the report with further recommendations and suggestions.  The Lead Consultant and the Task Force Members were also in attendance

After carefully scrutinizing and going through the report in detail, the participants came up with a Statement of the validation workshop pointing out further recommendations in moving forward towards operationalizing the Regional Center.

The workshop was adjourned by closing remarks from the Host Country, Uganda, and the IGAD Legal Counsel, Mr. Yufnalis Okubo, with vote of thanks to the participants, the experts, the staff, and the Government of Uganda. (END)