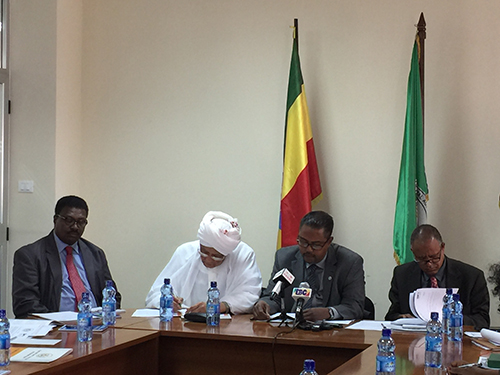 Irregular migration to Europe from the Horn of Africa is dominated by highly integrated transna-tional organized criminal networks. A new report jointly requested by the governments of Ethio-pia and Sudan, and prepared by IGAD’s Security Sector Program (IGAD SSP) and Sahan Foundation, describes the hazards of this migratory route and reveals how this dangerous and illicit trade is organized.

During the official launching ceremony, high level delegates from the two IGAD Member States (Ethiopia and Sudan), developmental partners from various diplomatic communities, regional organizations, and the press community were present.  Commander Abebe Muluneh, the Director of IGAD SSP welcomed the delegates and provided an introductory remark.  The Governments of Sudan, represented by H.E. Ambassador Osman Nafi (Ambassador of Sudan Embassy to Ethiopia, AU & ECA) and accompanied by General Dr. Mohamed Gamal Eldin (Focal Point of IGAD and from the Sudan National Counter Terrorism Center) followed by the Government of Ethiopia, represented by Mr. Berhane Assefa (Director General of IGAD at the Ministry of Foreign Affairs) gave statements, in which both highlighted the need and importance of this timely study report.  Mr. Matt Bryden, the Executive Chairman of Sahan Foundation then gave brief presentation of the report highlighting the genesis, the process and also the recommendations generated.  In general, all stakeholders involved in this area and who were present at the launching ceremony, including the Ambassador of Denmark to Ethiopia, representatives from the EU, IOM, Norway, Netherlands, Italy, UN Women, and UNODC all commended this initiative and called for a concerted and collaborated effort in implementing the recommendations outlined.

At the end of the ceremony, press conference was carried out whereby various media outlets received clarifications and information from panelists who are the forefront of this report.###