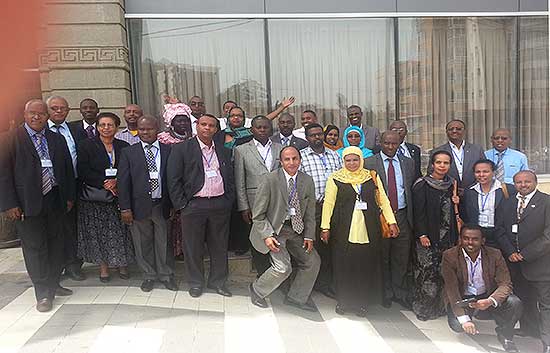 Addis Ababa, 14th June 2014. The IGAD Secretariat today launched the first ever scientific conference on health with particular emphasis on pastoralists and cross-border mobile populations in the region. The Conference was convened in Addis Ababa, Ethiopia, from 3rd to 6th December 2014. The launching ceremony was attended by representatives of IGAD Member States, the IGAD Secretariat, African Federation of Public Health Associations, other partners/stakeholders and the Media.

Speaking on behalf of H. E. Ambassador Mahboub Maalim, Executive Secretary of IAGD, Ms Fathia Alwan, Program Manager for Health and Development, stated that the Conference will provide a platform for building strong partnership, enhanced advocacy, evidence-based decision-making and mobilization of enhanced political will and resources. Ms Fathia thanked the Government of the Ethiopia for offering to host this International Conference. She also indicated that since the Conference is expected to take place every two years, on rotational basis, other member states would have the opportunity to host this even in due course of time. Finally, Ms Fathia called upon all IGAD Member States, international development partners, the scientific community and other stakeholders to actively participate in the Conference and contribute to its success. With support from the World Bank and DFATD Canada, IGAD is implementing the IGAD Regional HIV and AIDS Partnership Programme (IRAPP) since 2008. This is a gap-filling program that is jointly implemented by IGAD and the member states to cater for populations that had not been targeted by the national HIV and AIDS programs. The programme provides Sexual Reproductive Health and HIV and AIDS services to the target populations that include cross-border mobile populations, pastoralist communities, refugees and Internally Displaced Populations. At present, the programme is providing support to the target populations in 48 sites spread out in the member states of IGAD.

In line with its mandate, IGAD held the IRAPP 7th Steering Committee meeting in February 2014 to review the program implementation and also to give direction to the program. One of the recommendations that came out of this Steering Committee was a decision for IGAD to hold its firstInternational Scientific Conference on Health from 4th to 6thDecember 2014. The overall aim of holding an international scientific conference on health is to show-case IGAD’s achievements in the implementation of the IRAPP program and to set the platform for the continuation of IRAPP after 2014.

The up-coming International Scientific Conference on Health will in addition to showing the achievements of the IRAPP, share the good practices that have been identified at the various project supported sites so that other implementers in other places can try them. The conference will further foster partnership with stakeholders and generate adequate support to consolidate and to scale up the cross-border intervention in the IGAD member states. In this regard, the conference will serve as an avenue, and a spring-board for mobilizing resources for the pastoralists and mobile populations’ intervention program.

In preparations for this very important conference, IGAD has conducted a two-dayconsultative meeting held at Capital Hotel in Addis Ababa, Ethiopia from 13th to 14thJune 2014. The meeting, organized by IGAD in collaboration with the African Federation of Public Health Associations (AFPHAs), was attended by health experts from the IGAD member states.  The meeting created shared understanding on the purpose of the IGAD International Conference on Health, agreed on the key dates for the conference, key issues and topics for the conference. At the end of the meeting, a launching ceremony for the IGAD International Scientific Conference on Health was held, presided over by the FDRE, IGAD and AFPHAs.