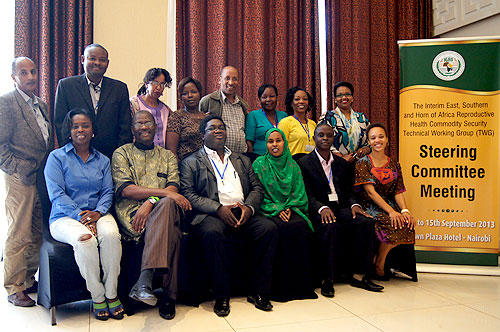 A two-day meeting to review and adopt the terms of reference for the technical working group on reproductive health commodity security in East and Southern Africa region including the Horn of Africa started yesterday in Nairobi with participants drawn from IGAD, the East African Community (EAC) and the Southern African Development Community (SADC).
Addressing the meeting that was also attended by officials from the United Nations Fund for Population Activities – East and Southern Africa Regional Office (UNFPA-ESARO) and the Population Services International (PSI), Ms. Fatuma Adan, the program coordinator in charge of reproductive health and reproductive health commodity security at the IGAD Secretariat commended UNFPA for supporting the formation of the group. Describing the initiative as long overdue, she reaffirmed the commitment of IGAD to take up responsibility of chairing the interim steering committee of the group and further conveyed the approval and support of the IGAD Executive Secretary.

In addition, Ms. Adan acknowledged the roles being played by EAC and UNFPA-ESARO as rapporteur and secretariat to the working group respectively, while appreciating the   inclusion of SADC and the Common Market for East and Southern Africa (COMESA).

The main outcome of the Nairobi (August 2012) and Johannesburg (April 2013) meetings that were also attended by development partners like PSI, USAID, and JSI-Deliver was the establishment of an Interim East, Southern and Horn of Africa Reproductive Health Commodity Coordination Committee/Technical Working Group. The initial purpose of the group is to support the coordination of condom logistics, including advocacy for adequate supplies, promotion, acceptance and use of male and female condoms, personal lubricants and other required SRH commodities in the region.

The lack of representation of Djibouti, Somalia, South Sudan and Sudan was discussed and a decision taken to ensure their participation in subsequent meetings.

“As we move forward, we will seek to build consensus with all member states of our RECs and find common lasting solutions to the challenges that bedevil us,” highlighted the Interim Chair, explaining that there is need to work with the RECs to ensure engagement with the member states.

She further stated that despite logistical challenges, the interim steering committee will continue to mobilize resources and support from all RECS and development partners in the ESA region to address the pertinent issues around RH and RHCS.

This latest meeting is expected to come up with the final TORs and work plan for the working group today. The participants will also review the status of reproductive health commodity quality assurance in the region, including the need for the assessment of regional laboratories for accreditation.

Yesterday, Dr. Guyo Jaldesa, a senior lecturer in obstetrics and gynaecology at the University of Nairobi presented a power point on the status of RHCS among cross border and mobile populations in the region. Dr. Jaldesa who is also a practising obstetrician/gynaecologist and the regional coordinator of FIGO – the International Federation of Gynaecology and Obstetrics said that there are massive inequalities, masked by aggregated national data and called for national governments to invest in RHCS, especially among CBMPs.

“Our aim as a federation is to prevent unsafe abortions by preventing unwanted pregnancies,” he stated, lamenting that current statistics show a grim picture in the region. Dr. Jaldesa pointed out countries have to adopt innovative approaches to reduce maternal deaths and increase the use of contraceptives.

He added that success depends on reaching these underserved communities in far-reaching areas and therefore appealed for effective referral and health information systems to be put in place while ensuring competency of service providers and continuous supply and equipment.