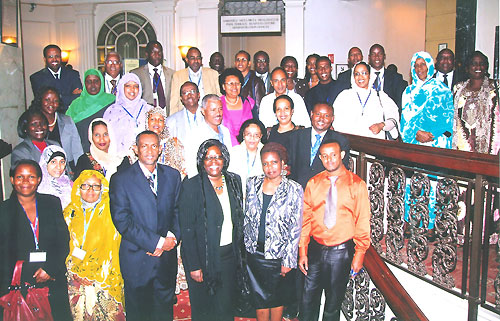 The Intergovernmental Authority on Development (IGAD) Secretariat has conducted a Technical Review Meeting of the Revisited and Updated IGAD Gender Policy and Strategy from 21st to 22nd June 2012 in Nairobi, Kenya. The event was attended by delegates from women/gender affairs ministries of IGAD Member States as well as development partners.

The meeting was officially opened by a statement of the IGAD Executive Secretary, H.E. Eng. Mahboub Maalim and a key note address made by a representative of the Ministry of Gender, Children and Social Development of the Government of Kenya, Ms. Mary Kabaru.  Another speaker in the opening ceremony  was the  UN Women Regional Program Director for East and Horn of Africa, Ms. Christine Musisi.

The IGAD Gender Policy and Strategy was launched in 2004 and the need for revisiting and updating it was realized in light of new developments and emerging issues with regional and international context.  The participants of the meeting critically reviewed the draft policy and validated it by making some proposals to amend and finalize the document. At the end of the two days meeting, the delegates of the ministries of women/gender affairs of member states have given the mandate to IGAD Secretariat to present the Gender Policy Framework to the upcoming IGAD Policy Organ Meeting for endorsement